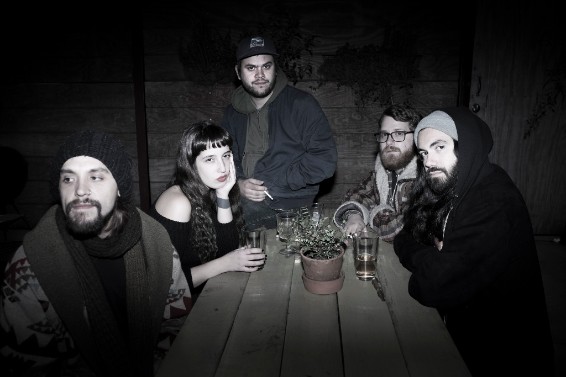 Farnham Out February 24th on Exploding In Sound Records

Baked are sharing the video for their new single “Danelectroladyland” today via CLRVYNT. Directed by Baked’s own Jeremy Aquilino, the video captures the band on the road from last year’s US tour with Titus Andronicus and Spider Bags. Don’t let the name fool you, Baked aren’t your typical stoner rock. The band’s upcoming album Farnham, due out February 24th, is a masterwork of dusty country, blistering shoegaze, fuzzed out indie, and slow burning rock ‘n’ roll. “Danelectroladyland” is what RJ Gordon (vocals/guitar) recently called “a nod to the famous NYC studio (Electric Lady), a nod to Hendrix I guess, a nod to the guitar brand (Danelectro), and a nod to a special lady I knew years and years ago who played a Danelectro Baritone guitar”. Steeped in a slow rolling fog, “Danelectroladyland” opens with a warbling calm before eventually peeling its way into a thick wall of sound.

Baked have announced both an album listening party (February 11th) and album release show (February 24th) in addition to an official slot at this year’s SXSW. All details can be found below-

BIO:
It would be safe to call Baked veterans of Brooklyn’s DIY scene. They’ve ran their own show space (Big Snow), they’ve worked for years at Shea Stadium, and they’ve spent time touring and playing in bands like Titus Andronicus, Lost Boy ?, Bueno, and more. Their focus however… remains forever Baked. It’s been a lengthy two and a half years since their full length debut but the perennially foggy quintet has returned with a new line-up and a new record, Farnham. The wait is over and Baked are “lit” in every sense. RJ Gordon (vocals/guitar), Isabella Mingione (vocals/keys), and Jeremy Aquilino (bass) are joined by Steve Hartlett (guitar) and AJ Pantaleo (drums), rounding out the band while adding their own unique sonic input. Baked like to play loud yet calm, moseying their way into swarming riffs because not everything needs to be rushed. Fried and blustery, Baked play it cool as the peel through outlaw country ballads, soul inspired pop, and jittery punk, blending genres with the greatest of ease and good senses. The bar has been raised, Baked are ready to rip. Heavier, sultrier, more dynamic, and out right riskier, nothing is off limits on Farnham and Baked sound more alive than ever.

Farnham, due out February 24th via Exploding In Sound Records, is a record that is very much indebted to changes. Changes that come from loss and those that come from living life. It’s an album dedicated to a lost friend (Ken Farnham, the record’s namesake) but it’s also an album of a band that has experienced it’s own changes in members since their debut. It’s also the first album they’ve released since Baked’s lead songwriter RJ Gordon joined Titus Andronicus… which is all to say, change weighs heavy. Baked remain forever true to their own vision but they’re adapting and evolving as a collective, opting to recline a little deeper, push a little further, and create the best version of themselves they can muster up. Sure the band still like to get, well, baked… but their sophomore album is mature and fully realized, a reflective record that comes from the band’s heart. Speaking about the album’s title and themes in a recent interview, Gordon (vocals/guitar) shared: