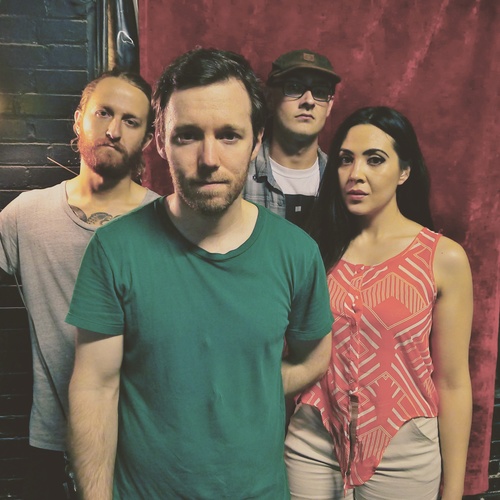 AMERICAN WRESTLERS
Share video for “Give Up”
Taken from their new album Goodbye Terrible Youth
Out now via Fat Possum
American Wrestlers are kicking off  2017 with a new video for “Give Up,” the first single off their second album, Goodbye Terrible Youth, out now onFat Possum. The video is centred around the band performing in a recording studio with a mysterious Plant Man working the boards in the background. It was filmed at Steve Albini’s Chicago studio, Electrical Audio.
Here’s what frontman Gary McClure has to say about it:
“I wanted a very simple video, which had one other odd element that remained unexplained. The band performing in the studio felt like the most straightforward and it was a little bit of a throwback. I always wanted to record in Electrical Audio in Chicago. It’s a very beautiful building inside and out and they had all these cool looking instruments ready to pick up and play. Of course, the whole thing could be a witty knife-in-the-back comment on 21st century music. But that’s unlikely.”
The video was premiered over at Stereogum, who wrote: “The song seamlessly bridges Cure-like new wave verses, a soaring shoegaze chorus, and an aggressive riff-driven finale. It’s matched by hazy performance footage that makes Gary McClure and company seem like a quite likable bunch.”
Goodbye Terrible Youth is now streaming and available for purchase on all services.
WATCH VIDEO FOR “GIVE UP”
https://www.youtube.com/watch?v=zLQ1Bvm7SFo
STREAM GOODBYE TERRIBLE YOUTH
http://smarturl.it/aw.gty
LISTEN TO “AMAZING GRACE” & “SO LONG” DEMOS
https://soundcloud.com/fatpossum/sets/aw-bonus-demo-tracks/s-GGpQY
American Wrestlers, the once-anonymous project of St. Louis-by-way-of Scotland songwriter Gary McClure, released Goodbye Terrible Youth in November 2016 via Fat Possum. This follow-up to their 2015 debut sees McClure taking bedroom recordings onto a bigger stage without sacrificing the intimacy that makes them so attractive. If his self-titled album showed his knack for stringing together addictive guitar lines—the shimmer of shoegaze mixed with the emotional fist pump of power pop—Goodbye Terrible Youth amplifies that energy with a road-tested band. Literally breaking out of the home studio—the Tascam mixer McClure had been recording on has fallen apart from overuse—he’s embraced a bigger sound and stage on Goodbye Terrible Youth, his rueful yet propulsive songwriting only becoming sharper.
PRAISE FOR AMERICAN WRESTLERS
“American Wrestlers’ frayed-at-the-edges indie pop places gnarly guitars at the centre and has tunes to burn, recalling the dreamy animation of Real Estate.” Q 4*s

“Pairing McClure’s twin geographic poles of American sunshine song craft and the reflective rainy day sentiment that Scots like Uncle Roddy and Teenage Fanclub are so adept at.” Mojo

“The group blends pop sparkle and melancholy indie charm in the manner of The Chills.” Uncut 8/10

“There’s a great and clear leap forward this time around, but this still has all the cornerstones of what drove so much attention: the ability to lull listeners through power pop or be taken in dreamlike trances, lyrics that take you on new journeys with every listen. It’s all there.” DIY 4*s