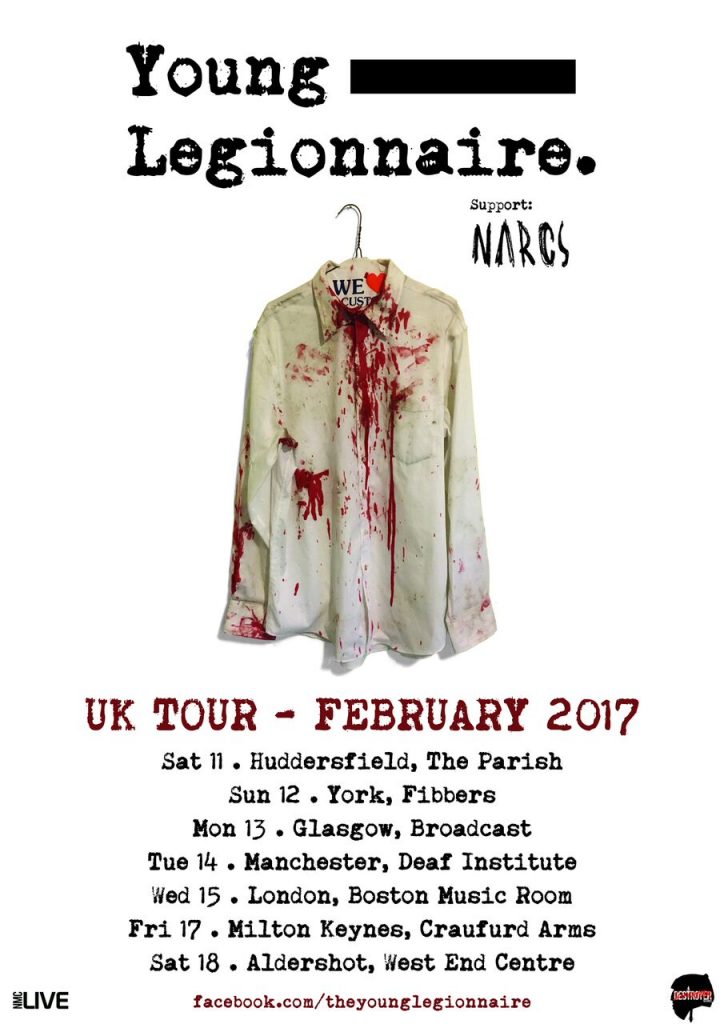 YOUNG LEGIONNAIRE ANNOUNCE UK TOUR DATES
Young Legionnaire who feature former Yourcodenameis:milo frontman Paul Mullen, ex-Bloc Party bassist Gordon Moakes and Dean Pearson on drums have announced a UK tour for February 2017.  Gordon comments:
“This will be our longest UK tour, or any kind of tour, for about five years. A Young Legionnaire tour is like a bus: you wait years for one to come along, and then one comes along. Not three. Anyway, it will be considerably louder, more full of riffs and all-round rock goodness than any bus I’ve ever been on.”
This latest runs of shows follows the recent release of their 2nd album ‘Zero Worship’ in November this year. ‘Zero Worship’ is a record fighting to be heard in a sea of noise, both literally and conceptually. Recognising there are vast swathes of new music releases destined to go unlistened, ‘Zero Worship’ is pulled along by the tide, but swimming against it too.
It’s political, in other words, at a time when musicians seem afraid to confront issues and ideas head on. Its subjects are many: the failure of the internet to set us free from the powers that be; the rise of post-truth politics; the increasing polarisation of online communities; the image of the anonymous protestor, embodying “a collective hope, in a hopeless time’
They will be supported by Leeds based alternative-indie noise outfit Narcs.
UK Tour – support from Narcs
11/02 – Huddersfield, Parish
12/02 – York, Fibbers
13/02 – Glasgow, Broadcast
14/02 – Manchester, Deaf Institute
15/02 – London, Boston Music Room
17/02 – Milton Keynes, Craufurd Arms
18/02 – Aldershot, West End Centre
Over the past few months Young Legionnaire have released 3 videos from the album. Watch them all here –
Candidate – https://www.youtube.com/watch?v=lzI8RaFsRtY&feature=youtu.be
Heart Attack – https://www.youtube.com/watch?v=6x0cBp1ebVw
Disappear – https://www.youtube.com/watch?v=eO0fT09gYEQ&feature=youtu.be
‘Zero Worship’ is the very definition of organised chaos’ – 4/5 – Upset Magazine
‘It finds the group truly gelling, with their different histories, tastes, and techniques merging into one unique entity’ – Clash Magazine
‘A cracking album worthy of attention’ – 5/5 – Narc Magazine
‘A multitude of genres come together to form an album that has no problem in doing whatever the hell it wants’ – Dork Magazine
‘A record that clearly shines in its quietest moments’ – The Line of Best Fit
‘Zero Worship’ is out now on Superstar Destroyer Records.
http://superstardestroyer.co.uk/
www.facebook.com/theyounglegionnaire