The Sadies have premiered “It’s Easy (Like Walking)” featuring Kurt Vile from their new album with Consequence of Sound. The track is the second single to be released from Northern Passages, their 10th studio album, out February 10, 2017, on Yep Roc Records.

Of the track The Sadies’ Dallas Good says, “Kurt did a tour supporting The Sadies about a thousand years ago. We didn’t really  know each other before that but we’ve been friends ever since. We always talked about collaborating one day so I forced his hand by sending him this finished song with a very short deadline attached. He delivered, as he always seems to do.”

Northern Passages was recorded in the basement of Dallas and Travis’ parents’ home north of Toronto over the winter of 2015, the familiar surroundings and lack of distractions resulted in a consistent feel, despite the eclecticism at the heart of The Sadies’ sound. The psych-folk flourishes on tracks such as “Riverview Fog” are no mere homage; this is the sound of our inscrutable world, and how we manage to survive in it.

The band recently premiered the haunting, harmony-filled first single, “Riverview Fog” with Twangville which began as a letter to their friend Rick White, whose contributions, both musical and visual, have helped to shape The Sadies’ story.

The essence of The Sadies’ story can be summed up with the powerful image of the aurora borealis adorning the cover of their latest album, Northern Passages. Ever since the quartet, comprised of singer/guitarists Dallas and Travis Good, bassist Sean Dean and drummer Mike Belitsky, first arrived on the North American scene 20 years ago, their music has never been less than awe-inspiring, with no embellishment necessary.

Northern Passages is now available pre-order.
.
Northern Passages tracklist:
01. Riverview Fog
02. Another Season Again
03. There Are No Words
04. It’s Easy (Like Walking) (feat. Kurt Vile)
05. The Elements Song
06. Through Strange Eyes
07. God Bless The Infidels
08. The Good Years
09. As Above, So Below
10. Questions I Never Asked
11. The Noise Museum 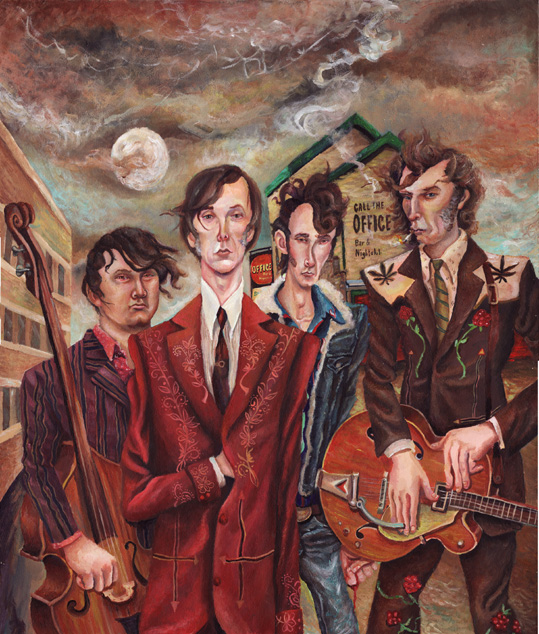