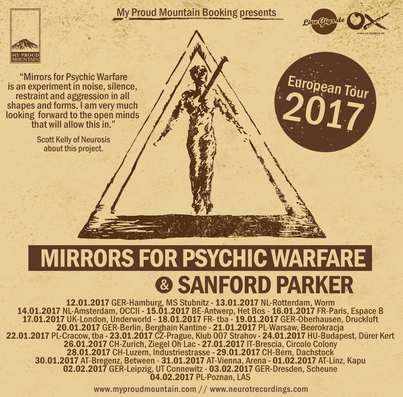 MIRRORS FOR PSYCHIC WARFARE AND SANFORD PARKER ANNOUNCE EUROPEAN TOUR STARTING JANUARY
Mirrors For Psychic Warfare have announced plans to return to Europe in January 2017, following a jaw-dropping performance at Roadburn Festival earlier in the year. Along with Sanford Parker, who will also be performing his solo experimental electronic set. There are 22 shows in all, including a visit to the UK, starting on January 12th in Hamburg – and you can watch a trailer for these dates below…
WATCH THE CINEMATIC MIRRORS FOR PSYCHIC WARFARE TOUR TRAILER
Mirrors For Psychic Warfare is the collaboration between Neurosis’ Scott Kelly and Buried At Sea’s Sanford Parker. The band released their self-titled debut – a sonic manifestation of insomnia, complete with the tossing, turning, and perennial dread that comes with facing a new day – earlier this year via Neurot Recordings. The five songs that comprise Mirrors For Psychic Warfare lurch and pulsate across a sullen, desolate landscape with an almost curious obsessiveness. You can hear in full at their bandcamp.
Anyone who has lowered their ear into the chasm of sound between metal and industrial in the last couple of decades will most likely have come into contact with Parker’s work. Perhaps through the bands and projects in which he is or has been involved as a musician: the doom-prophesying powerhouse Buried At Sea, the extreme-sound fraternisation, Corrections House, or perhaps the doom/post-metal shamans Minsk. Or maybe via the sheer volume of the releases to which he skilfully brought his very own toxic sound as a producer or sound technician. In this capacity, the name-dropping begins with Pelican, Eyehategod, Rwake, and Voivod and carries on far beyond YOB, Lair Of The Minotaur, and Wovenhand. In many cases (Minsk, Corrections House, Twilight, YOB, Blood Ceremony), he even combined the two areas of activity in an interdisciplinary radicalisation of sound both through the amps and behind the mixing desk.
In a way, this material is the translation of doom into the methods of electronic music. A concept work of cross-genre, dystopian music that builds on the loops and sequencer programs of industrial, but shuns purely linear song structures in favor of instrumental storytelling, the development of which expands a track into an entire world of sound. In the process, Parker knowingly invokes American and British industrial traditions, but equally, his microscopic detail work – primarily observable in the harmonics – could easily have come from German avant-garde electro institutions such as Raster-Noton or Mille Plateaux. These ideas manifested themselves in his solo album of this year, Lash Back, which imposes itself on the contemporary extreme music scene like the black monolith in Kubrick’s Space Odyssey – unassailable, incomparable, and perfect in form. Listen to the record in full at bandcamp.
MIRRORS FOR PSYCHIC WARFARE AND SANFORD PARKER TOUR DATES
12.01 – GER, Hamburg, MS Stubnitz
13.01 – NL, Rotterdam, Worm
14.01 – NL, Amsterdam, OCCII
15.01 – BE, Antwerp, Het Bos
16.01 – FR, Paris, Espace B
17.01 – UK, London, Underworld
19.01 – GER, Oberhausen, Druckluft
20.01 – GER, Berlin, Berghain Kantine
21.01 – PL, Warsaw, Beerokracja
22.01 – PL, cracow, tba
23.01 – CZ, Prague, Klub 007 Strahov
24.01 – HU, Budapest, Dürer Kert
26.01 – CH, Zurich, Ziegel Oh Lac
27.01 – IT, Brescia, Circolo Colony
28.01 – CH, Luzern, Industriestrasse
29.01 – CH, Bern, Dachstock
30.01 – AT, Bregenz, Between
31.01 – AT, Vienna, Arena
01.02 – AT, Linz, Kapu
02.02 – GER, Leipzig, UT Connewitz
03.02 – GER, Dresden, Scheune
04.02 – PL, Poznan, LAS
ABOUT MIRRORS FOR PSYCHIC WARFARE:
“Parker’s ability to invoke foreboding tones and textures enhances the ritualistic features, bringing MPFW closer in line with Jef Whitehead’s defunct project Lurker Of Chalice than Corrections House…the psyche rattling tension they maintain is as unnerving as it gets.” – METAL HAMMER
“Imagine a broken mirror on the floor, one shard catching your eye, reflecting a warped, spectral veil emanating from those motherships when at rest, like exhaust pipes slowly bellowing, and a mist created by gradually subsiding engine heat.” – ZERO TOLERANCE
“Kelly and Parker deal in a form of debased, defeated industrial future-folk, a zoned-out space cluttered with crunching metallic debris. Some of the quieter moments skirt the dreaded dark ambient category – but that subgenre always seems to suggest hokey cyberdelic techno-sabbats or the Hellraiser sequel in which chief Cenobite Pinhead sashays around on a spaceship. By contrast Mirrors For Psychic Warfare seed concerns about depleted stocks of tinned food and the likelihood of typhoid.” – WIRE
ABOUT LASH BACK:
“Sanford Parker shedding layers until there’s only his bare heart exposed – heart, as in a dark powerful engine, an inhuman mechanical contraption pumping oil to his moving limbs.”
– TERRORIZER
“As if to ask how much more sonic punishment you can take, Parker saves his most abstract piece for last. The charmingly-titled ‘Sheep Slaughter’ verges on the sadistically nightmarish sounds of noise artists such as Prurient, although it does include quieter, calmer gaps in between the barrages of nastier noises. Thanks to this metal interloper, electronica just got a whole lot heavier.” – THE PLAYGROUND
“Sanford has found yet another genre that he is able to master and make his own.” – AVE NOCTUM
“Lash Back is not a welcoming record. There aren’t many comparable acts who are so visceral and angular, but it’s a rewarding listen and another success for Parker, who has found another avenue in which to excel. For anyone following his work this is more than worth your time, and for metal fans who are intrigued by electronic music, this may scratch an itch you didn’t know you had.” – THE MONOLITH
mirrorsforpsychicwarfare.bandcamp.com
sanfordparker.com
www.neurotrecordings.com
www.myproudmountain.com