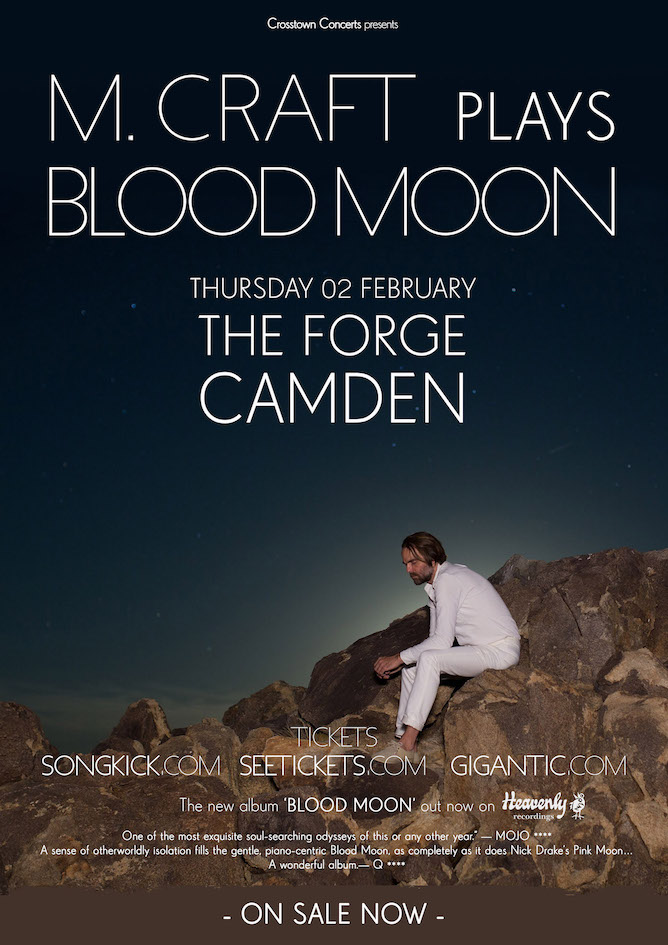 Following excellent reviews for his album Blood Moon, released in June on Heavenly Recordings, M. CRAFT has announced news of an intimate London headline show at The Forge in Camden in early February, performing the LP in its entirety. Date/info below:
Thursday 2nd February – LONDON – The Forge tickets
Critical acclaim for Blood Moon, out now on Heavenly Recordings:
“Like a baroque suite set adrift from its moorings… One of the most exquisite soul-searching odysseys of this or any other year.” MOJO – 4 Stars ****
“A sense of otherworldly isolation fills the gentle, piano-centric Blood Moon, as completely as it does Nick Drake’s Pink Moon… A wonderful album.” Q – 4 Stars ****
“A meditative mood-piece, wrought from echoing piano, minimalist orchestrations and sudden, cascading waves of vocal harmonies. This is atmospheric ghost music, recalling Mercury Rev, Sufjan Stevens and Simon & Garfunkel at their most ethereal, while the lovely ‘Chemical Trails’ sounds like CSN in space.” Uncut

“With its twinkly desert aesthetic and night-sky prettiness, the emphasis on piano and Craft’s melodies recall British folk traditions as well as US ones.” The Guardian – 4 Stars ****
“A ten point meditation centred around gorgeous midnight piano pieces, this is the classical pop album that Villagers’ Conor O’Brien would fawn over.” London In Stereo
“Blood Moon is a record that is as soothing as it is powerful, showing a songwriter at the top of his game.” Louder Than War – 8/10
Just ahead of release Craft shared a visually arresting video to the track “Chemical Trails”. Directed by George Byrne and shot around Palm Springs, the video beautifully captures the dreamy, drifty essence of the track. Click HERE to watch. Craft also recently unveiled a Beyond The Wizards Sleeve reanimation of the track which can be heard HERE.