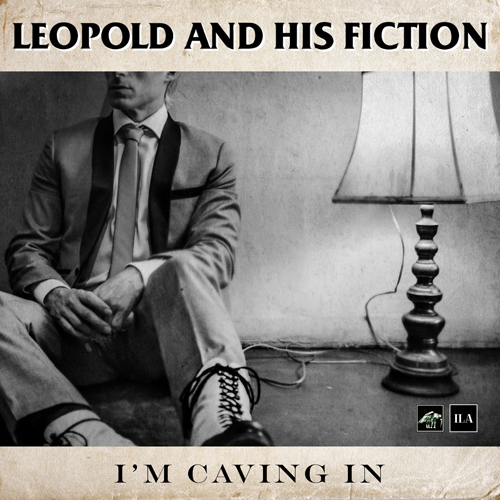 NEW SINGLE ‘I’M CAVING IN’ + VIDEO OUT NOW
NEW ALBUM ‘DARLING DESTROYER’ COMING JANUARY 2017 ON ILA/NATIVE FICTION
The Austin-based Leopold and His Fiction have released the single ‘I’m Caving In‘ today along with the accompanying video. The video finds the band in a dreamlike cathedral, coming in and out of focus with psychedelic swirls and colors, mirroring the interior drama of the lyrical content.
Frontman Daniel Leopold tells Guitar World ‘I’m Caving In’ was written at a detrimental time of my life when I wasn’t sure I would continue on this path that I’ve worked so hard to be on or if I could even go on living. I know I can look back and identify with the person I was when I wrote it as I feel all people come to such crossroads again and again. Originally it was penned as a country song. But soon after writing it I figured out what I needed to be doing with my purpose in life and a direction for Leopold’s sound. It was through immense pain and what seemed like burden that forced me to simplify and dig in to where I am from and who I am.”
LISTEN TO ‘I’M CAVING IN’: https://soundcloud.com/independentlabelalliance/leopoldandhisfiction-imcavingin
The fourth full-length from Leopold and His Fiction, Darling Destroyer echoes that urgency with a savage yet soulful sound testifying to Daniel’s Detroit heritage. “I hear my upbringing in this album more than anything I’ve ever done in my life,” Daniel says. “The songs were telling me, ‘This is what you’re made of, so trust it.’” Equally rooted in dingy garage punk and Motown’s pop-minded R&B, Darling Destroyer burns with a frenzied intensity true to its emotional origins. “Looking back, these songs came from a place of fear and vulnerability,” says Daniel, who wrote much of the album while awaiting the birth of his now-five-year-old daughter. “It was my first time ever dealing face-to-face with the severity of that type of emotion and translating it into words. Harnessing its power in the studio pushed me in a way I’ve never been pushed before.”

Daniel was born and raised in Detroit where he first began playing music. He then moved to California to study writing where he started crafting songs for the first time – combining years of practice on the guitar with his literary inclinations. Releasing their self-titled debut in 2006, Leopold and His Fiction built up a reputation as a powerful live act and landed gigs supporting ZZ Top, Gary Clark Jr., and Dr. Dog. Between their sophomore release Ain’t No Surprise and 2012’s 3, Daniel co-founded the folk outfit Cowboy and Indian, and spent several years touring. He has now returned to Leopold and His Fiction and is revisiting his approach to songwriting, straying from his novelistic tendencies. You can expect the upcoming album to be the band’s most dynamic yet.
www.leopoldandhisfiction.com
www.facebook.com/LEOPOLDANDHISFICTIONBANDPAGE
www.twitter.com/leopoldfiction
www.instagram.com/leopold_and_his_fiction