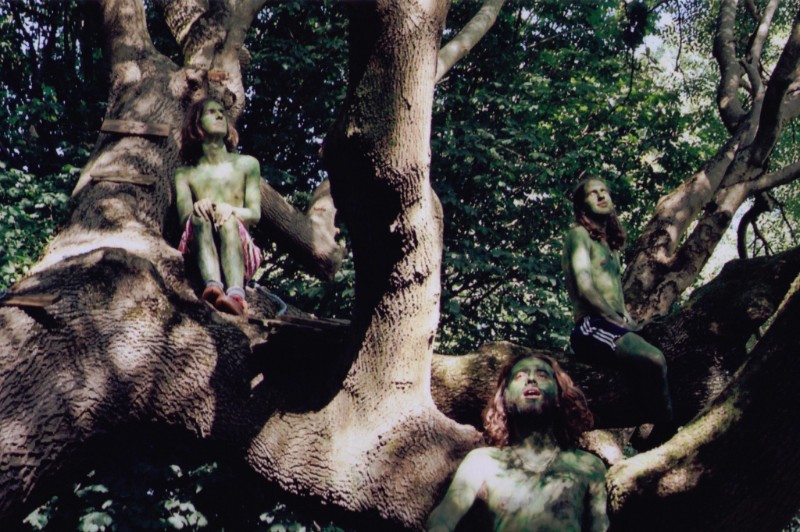 Set to begin their tour with WAND this November 4th, Brighton’s GANG immortalise their forthcoming single ‘Dead’ in a wonderfully macabre new music video, streaming on YouTube here, due for release on 7” vinyl this November 25th via Ra-Ra Rok Records.

Birthed out of an anxiety-riddled epiphany as way of coming to terms with the insurmountable notion of mortality, ‘Dead’s visuals, produced by Dog Brain Videos, dive deeper into these grave themes as the band meet a gruesome end on a road trip gone wrong. Yemrot Cire explains,

“Joseph Philip Hunt, James Brian Marshall Tormey and Eric Niall Tormey – members of the pop band Gang – have been found dead inside a rural, disused church near the village of Kingsdown in Kent. Cause of death has yet to be determined. There were no signs of physical trauma on the corpses, nor any chemical imbalance in their systems denoting a poisoning of any kind. Upon discovery it was noted that all hair had been removed from one of their bodies. The members of the band seem to have died without cause or explanation.

The story became even more bizarre when it was revealed that, carved into the door of the village church was this message: “Gang are dead, left lifeless in this temple of lies. They are not us, nor are we they. We are nameless, but you will call us Doppelgang; sent here to occupy their existence, hijack their legacy, and reveal the true nature of things. Humanity pales in comparison to our kind. Nothing is safe.”

Originally from Canterbury and Margate, now residing in Brighton, Gang are brothers Eric and Jimi Tormey and adopted sibling Joseph Hunt. Relying on a strong set of ethics, driven by the ethos to ‘do it themselves’, they seek to remain unified, not unaided. “To separate us is to conquer us, and unity is strength”, Jimi explains of their manifesto. “For this reason we surround ourselves with likeminded, creative individuals, forming a community – Gang is a messiah, an illustrator, a photographer, a videographer. We are any and all who aid us. Each of us is branded with a Gang tattoo committing ourselves to unity. D.I.Y, as we know it, is dead – R.I.P to D.I.Y – killed by vapid, lo-fi bedroom pop. We’ll D.I.O until we D.I.E.”

‘Dead’ stems from modern apathy,” Jimi continues. “We’re all dying right now and sadly in this modern, consumerist age we are taught, throughout life, to be concerned most with the clothes that cover us and represent us in death. Because of this we’ll be releasing this song alongside a clothing item with our friends at Terrible Merch (post ironic, huh?). If life is like writing a letter, then dying is one’s signature and death itself is the sealing of the envelope. We need not fear the end because it is one’s life that will echo in the words of the letter. One end is a new beginning and as long as the postal service doesn’t misplace you then the lives we have led will echo endlessly. So why don’t we stop trying to feed the void with money’s lack of sustenance and try to get a better feel for what’s important. We don’t want to feel better. We want to better feel.”

Following their praised ‘Animalia’ 7”, released earlier this year via Corner Shop Pop Records alongside a self-organised tour of the UK and a BBC 6Music session with Marc Riley, Gang have played alongside Sub Pop’s So Pitted and US sludge-lords Wand, who they will reunite with on a small UK tour through November on the dates below. All of Gang’s music is recorded by Eric at Barnroom Studios, the garage/studio of their father, cult guitarist Bernie Tormé (Ex-Ozzy Osbourne & Atomic Rooster), utilising the weird and wonderful recording equipment that he has collected over the years.