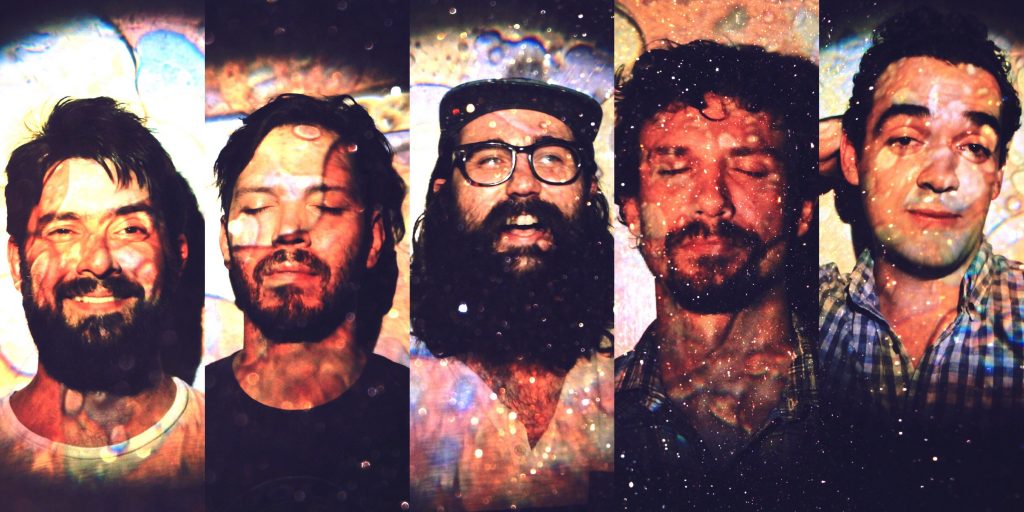 Due Out December 9th via Texas Is Funny Records

San Antonio’s We Leave At Midnight are excited to announce their new album The Holy Rolling Flower Band will be released on December 9th via Texas Is Funny Records. Today the quintet are sharing the album’s first single “Milo” with CLRVYNT. Mixing together swirls of psych pop, indie rock, folk, power-pop, garage rock and alt-country, the band have created a sound that resides somewhere sonically between The Beach Boys and Of Montreal.

Speaking about “Milo,” CLRVYNT shared, “We Leave at Midnight hail from San Antonio, but don’t call them cowboys — they’re really a bunch of Southern psychonauts. As with local forebears Midlake, the Texas band (fronted by singer-songwriter John Dailey) churns out ornate rock that — however Beatles-indebted — can’t help but meander off into dreamland like the Elephant 6 collective.”

The Holy Rolling Flower Band develops moods and vibes that traverse from the airiness of country twang to the warped perceptions of psychedelic fuzz pop. With segues and interludes, the record is built into a sweeping odyssey that revolves around a tight conceptual sound. The Holy Rolling Flower Band is built upon the theme of a psychedelic traveling circus, due in part to the fact the band recoded the album with a variety of players on it and the transitory nature of the collective’s sound. Led by John Dailey, We Leave At Midnight set out “to make a maniacal tour de force that would take you for a dynamic ride that show you how the highs are high and the lows are low.”

ABOUT WE LEAVE AT MIDNIGHT:

We Leave at Midnight picks up the shards of broken dreams and discarded romance while cashing in on yesteryear’s angst for a newfound wisdom on love and loss. The Texas five-piece’s own psych-rock omniverse presents swirling pop confections that buzz inside blistering guitar constructions. Vocalist and guitarist John Dailey builds the new story of rock around a chemical reaction of multi-dimensional players. With 5+ years of commitment to the craft, WLAM’s dense groove translates from recordings to the stage for a potent mix of both the abstract and concrete. New recording The Holy Rolling Flower Band features material brewed from an assortment of emotion, life experience and an appreciation of rock’s classic creators.

Bubblegum and dissonance rarely join forces in our collective, musical imaginations, but We Leave at Midnight put multiple matches to the test and does more than combine influences. Generating the new breed of songwriting for a collective in pop and the human experience, WLAM packs a lovesick tempo punch on The Holy Rolling Flower Band. Dailey leads the devoted crew of multi-instrumentalists through divided blasts of hope and exile. We Leave At Midnight invite you to dance, laugh, cry and change your life together with the band.