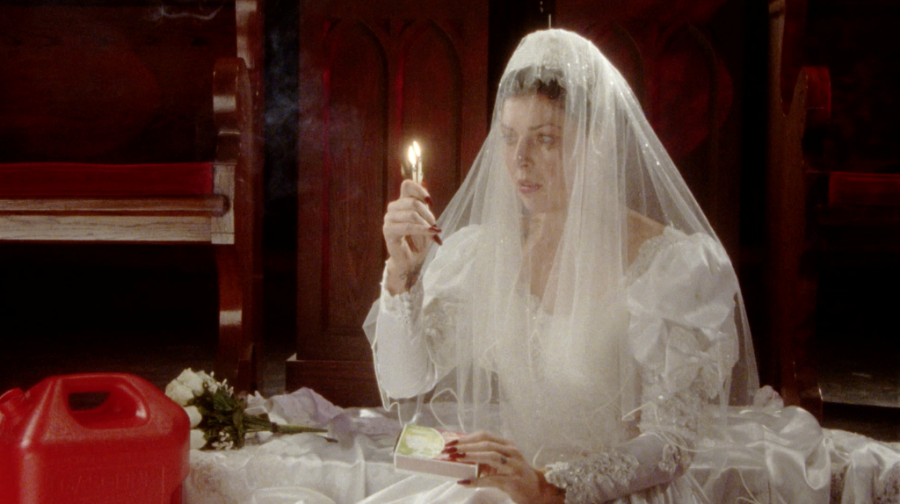 Sleigh Bells have today shared a stunning video for their forthcoming single, “I Can Only Stare”, the music video directorial debut from the independent filmmaker Alex Ross Perry (Listen Up Philip / Queen Of Earth) along with the band’s Derek Miller.

Alex Ross Perry said the following about the video:

“I had never been asked to direct anything, at all, ever, prior to Derek reaching out via Instagram about whether or not a collaboration would be something I might consider. I was flattered, and immediately interested. I knew from their prior videos that Sleigh Bells had a particular aesthetic and I was interested in finding ways to bring my working methods to that table. Then instantly, I felt this was a song I could hear a hundred or so times in the filming and editing, which also proved necessary.

From our first conversation, it was clear that Derek and Alexis had a blessedly specific vision for how this video should look, and feel. It was almost like being asked to direct something somebody else had written. However the extent to which the band trusted me to realize these ideas, from shooting on my preferred format of Super 16mm film with my regular cinematographer Sean Price Williams to using rear projection instead of green screen for certain scenes, made me feel like an equal partner whose ideas pushed the concept to places no other director might have pursued.”

The band’s Derek Miller said the following about the collaboration:

“The video follows three doomed women, all played by Alexis. It’s bleak but hopefully inspiring, too. Most of us have probably felt like one or all three of these characters at some point in time. I know I have. Making this was cathartic.

We had the privilege of working with Alex Ross Perry, one of my favorite young writer/directors, Sean Price Williams (badass Director of Photography) and a really, really great crew. Alex’s last film, Queen of Earth, was one of my favorites of 2015. There’s a tense, ominous quality to it which I hoped he would bring to the video. He did. His decision to shoot on Super 16mm film helped avoid the slick crispness we had grown tired of with digital cameras. It was a great experience. And a huge debt is owed to Robert Richardson, my favorite cinematographer. We ripped Mr. Richardson off big time for the rear projection screen performance footage.”

“I Can Only Stare”, which has an impact date of 25th November, was premiered by Zane Lowe at Beats 1 as his World Record. The single is the latest offering from the Brooklyn-based duo’s forthcoming album, Jessica Rabbit, set for release on November 11th 2016via Lucky Number across Europe and the band’s newly-formed label Torn Clean in the US.

Sleigh Bells, who are known for their intense live shows and commanding stage presence, have a sold out, intimate London show at The Dome this Thursday 27th October 2016.The band have also been invited to perform for the first time on BBC2’s Later… With Jools Holland on 1st and 4th November 2016. The duo will return to the UK and Europe for further live shows in early 2017, details of which will be announced soon.

Jessica Rabbit is an album that does not sound like anything Sleigh Bells has ever done – or anyone has ever done, for that matter. It is the sonic equivalent of firing synapses, with melodies zig-zagging in different directions in a beautiful and ever-modulating controlled chaos. It is playful but darkly so; flirtatious but caustic; ebullient but downright sinister. Singer Alexis Krauss has moved from the baby coo of the band’s earlier material into full powerhouse mode, singing with a visceral urgency that was absent from previous releases. Tempo changes stretch the songs in different directions, like an attention span gone haywire. It is a record that is wholly unique in sound and purpose, an unabashed and unafraid statement from a band that has made offending rote conceptions of pop music their signature and greatest strength.

Jessica Rabbit is available for pre-order now at the following stores: iTunes /  Limited Edition LP / CD. The track-listing is as follows: