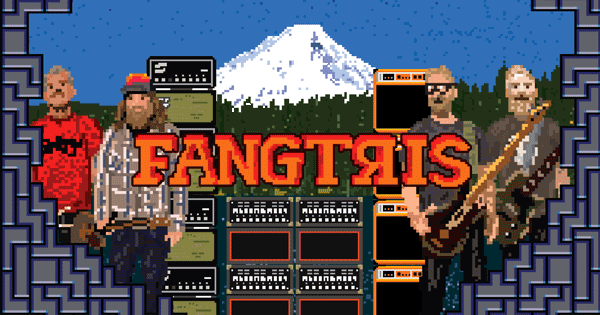 Currently touring Europe, following a UK run which saw packed out shows up and down the country, the band have also revealed a 16-bit video game, Fangtris, which can be played online here –  www.relapse.com/fangtris. Fangtris is a twist on the classic Tetris game, inviting players to stack the band’s gear on stage before the show starts.

Only Ghosts was recorded earlier this year at Ross Robinson’s Venice, California studio, with Robinson (At The Drive-In, The Cure, Slipknot) handling production and Joe Barresi (Queens of the Stone Age, Tool, Melvins) mixing the album. The band said of the experience, “Working with Ross and Joe on this record was a huge leap forward for us. The process was very challenging and rewarding, and I think we’re a better band for it. This album expresses exactly where we’re at. We’re super proud of it!”

Early reviews of the album affirm the sparkling results of the production partnership, with Kerrang! confirming Only Ghosts is packed with “pile-driving riffs and monstrous grooves,” while Metal Hammer offered, “diving deeper into the dark abyss like never before, this is Red Fang at their most sinister”.

In the weeks leading up to Only Ghosts’ release, the band have also created a tremendously clever video about wronged comic book collectors seeking Predator-style vengeance (“Shadows”: https://youtu.be/cnhCxVy5pfs), partnered with Stumptown Coffee Roasters for a tour-only blend dubbed “The Deep” after the song of the same name, and lent their music to Pabst Blue Ribbon’s retro pinball machine, The Can Crusher.