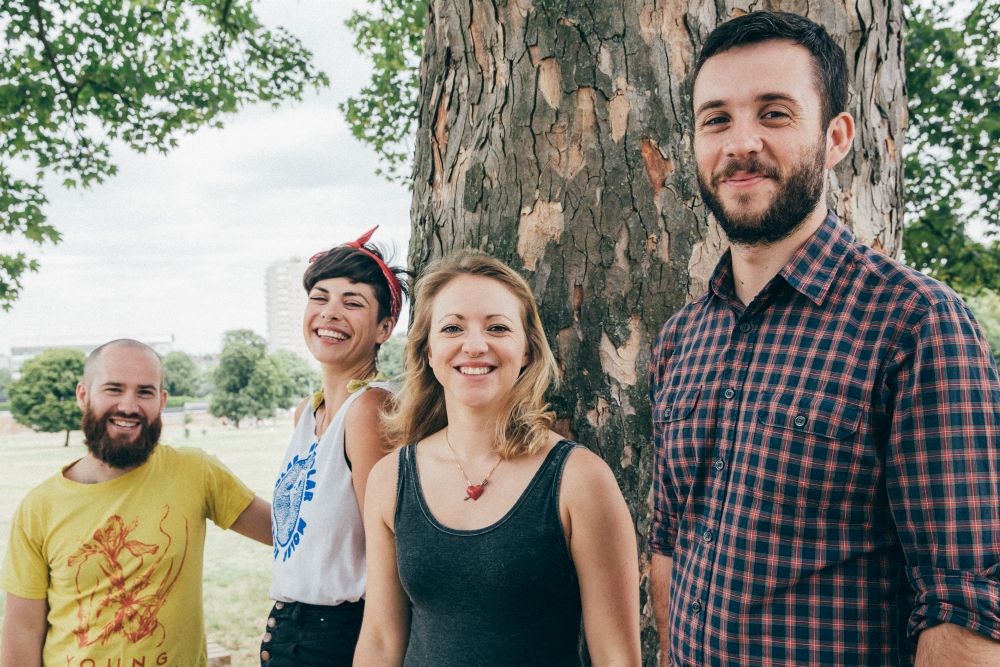 London’s Megaflora go bird watching in Peckham in their new music video for ‘Anxious’, a song which appears on the band’s forthcoming mini album ‘Redwoods’. The track is about singer/guitarist Max’s struggle to get out of a job that gave him anxiety; it’s a relatable topic much like the rest of the release. ‘Redwoods’ is four punks’ take on indie-pop, led by emotive harmonies and wonderfully jangling guitars. It will be released by London-based independent punk label Everything Sucks on 28th October. The seven-track collection of songs also features the previously released ‘We’re Not There’.

Megaflora are Christina (Bass), Frank (Drums), Ellen (Vocals/Keyboard) and Max (Vocals/Guitar). As socially gluey as a chatty pritt stick, Christina met Max when they were at uni, Ellen through roller derby, Frank through London punk circles and then she stuck them firmly together. Everyone apart from Max played in a band together already, but Ellen left to go travelling for a while. In the meantime, Max snuck in and subverted their pure punx vibe with his twee indie pop tendencies. Luckily, when Ellen came back she just added to this with some lovely harmonies and keyboard. After years playing in scrappy punk and hardcore bands, they’ve been concentrating on honing their pop writing skills and Megaflora’s latest release is the fruits of their labour so far.

Having already played live with the likes of Sheer Mag and Personal Best, Megaflora will be wielding their punk-fuelled indie pop tendencies at typically DIY shows across the country in November and December. See below for dates; more shows TBC.