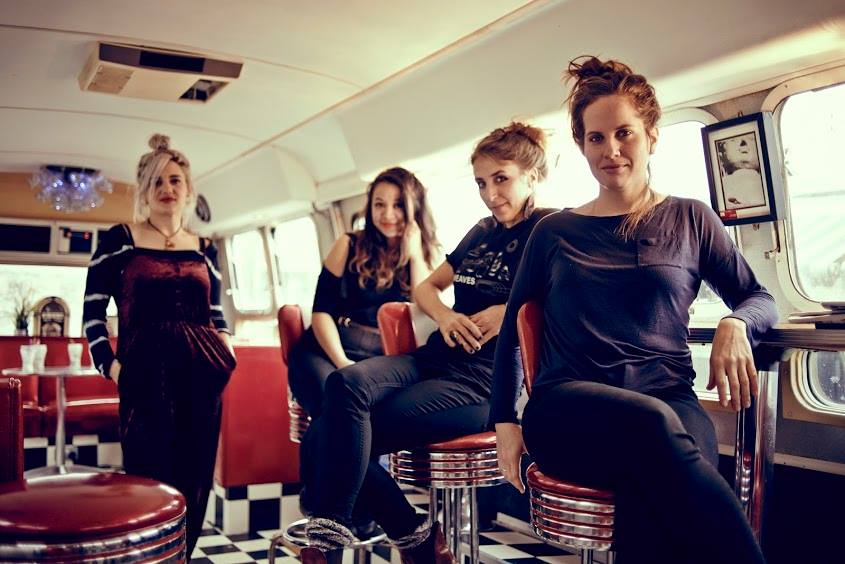 PLUS ANNOUNCE STORYBOOK TOUR
London-based four-piece Marine are pleased to share their first official music video for their brand new single, ‘Rapunzel’. Likening the track to a mix of Fable and personal experience, the song is about cutting off your hair to let your heart grow. With accompanying visuals by Bojan Brbora, the video’s choreography is inspired by Elvis Presley, the Spice Girls and Bulgarian folk dance.

Marine are set to play a select number of shows on their Storybook tour in book shops and comic book stores around London, as well as a shows around the UK.

Marine grew in the gaps between the concrete of the city, with four very different stories combining into one. Intuitive beats mix with hypnotic bass, whilst the two vocals of Cara Sebastian and Ruby Jack braid together over hooky guitar lines.

The songs of Marine are crystallised from mythology and fables, mingling with personal words and emotions to form tales of the ordinary and extraordinary. They describe themselves as ‘Fable Electric’, a genre all their own, combining their fascination of the underworld, Seal demons, mighty Kraken, werewolves, witches and gods…. even questioning the very nature of storytelling itself.

Drawing parallels with Kate Bush, PJ Harvey, Radiohead, and Warpaint, these audacious girls have been running their own show, touring Europe and the UK and quickly building a cult following in Berlin and London flogging countless handmade CDs and artwork. Their first festival season together last summer saw dynamite shows at Secret Garden Party, Shambala and more, leading to support from BBC6 Music.

Their story is just beginning as they delve deeper into their concept, having just proudly finished their debut album with a producer they greatly admire; Rob Ellis (Anna Calvi, PJ Harvey, Cold Specks).

“Submerging ethereal vocals and gentle guitars in an ocean of space.” NME

“Its instantly apparent how beautiful a collaboration Marine are; dreamy, rich, robust vocals… It’s the musical equivalent of a creamy post-coital blush.” The Line of Best Fit

“Ones to watch in 2016. A soulful, powerful blend of understated but intricate guitar parts and dexterously interwoven vocals, which will tickle the fancies of Daughter and Warpaint fans.” Drunken Werewolf

Goatsnake share a new jam, Grandpa Jones from their upcoming album, Black Age Blues, due for release on June 1st‏