LE BUTCHERETTES DEBUT “MY MALLELY” VIDEO;
THE TERI GENDER BENDER-FRONTED OUTFIT ARE TOURING EUROPE WITH A SCHEDULED APPEARANCE AT LONDON’S ROUGH TRADE EAST
Le Butcherettes, who are in the midst of a European tour, debuted the Omar Rodriguez-Lopez directed video for “My Mallely”, which appeared on their 2015 album, A Raw Youth (Ipecac Recordings).

The video was filmed in the contrasting locations of New York City and the ruins of Juárez Mexico, in a neighbourhood and cinema that was a casualty of the 2008-2013 war. Teri Gender Bender offers context to the video: “The juxtaposition of the video’s setting, place and time is a roller coaster of emotional history. Juárez. A lost city re-emerging. New York City. Feeling lost in a city that has been emerging. The duality is a constant in every feeling and way. No matter where you are, one absorbs their surroundings and grows within the chaotic element. That to me is the beauty of survivalism.“

WATCH THE VIDEO FOR “MY MALLELY”

Le Butcherettes, have dates in the UK and Ireland on the horizon next week. The Dallas Observer smartly described Le Butcherettes’ live performance: “TGB is so free and untethered and immensely talented that she should be everyone’s hero. We can all learn something by watching someone scarily good enough to write a song like “Bang!” (which, if PJ Harvey had written it, we’d still all be talking about in hushed tones today) hopping around the stage in the style of a crab that’s having an aneurysm, a wall of hair covering her face, screaming off into the middle distance where there is absolutely no microphone.”

It is also with extreme delight that we can announce that whilst in London, Le Butcherettes will make an appearance at Rough Trade East at 1pm on Friday 14th October. They perform at The Black Heart that same evening with all remaining tour dates listed below:
LE BUTCHERETTES TOUR DATES:
October 7  Zurich, Switzerland  Dynamo
October 8  Milan, Italy  Tunnel
October 10  Valencia, Spain  Loco Club
October 11  Madrid, Spain  El Sol
October 12  Barcelona, Spain  Sidecare
October 14  London, UK The Black Heart (appearance at Rough Trade East @ 1pm)
October 15  Coventry, UK  Kasbah
October 16  Birmingham, UK  Hare & Hounds
October 17  Cardiff, UK  CLWB ifor Bach
October 19  Dublin, Ireland The Workman’s Club
October 20  Belfast, UK  Black Box
October 21  Glasgow, UK  King Tut’s
October 22  Manchester, UK  Night & Day
[Gender Bender’s] combination of force and keen observation is reminiscent of Corin Tucker at her best, though Gender Bender’s performance is all her own,”  – NPR
“Frontwoman Teri Gender Bender galvanized the audience with a surreal, powerful, and truly gender-bending performance…her vocals combined the best qualities of Grace Slick, Beth Ditto, and Robert Plant….her charisma is a little Kathleen Hanna, and sometimes a lot Jim Morrison and Johnny Rotten, with Alice Cooper’s flair for the campy and bizarre.” – NOISEY
“Le Butcherettes make music with something at stake. They don’t play it safe and aren’t afraid to go down some cavernous pathways of dark, thunderous rock that the likes of Black Sabbath and early Led Zeppelin would have whole-heartedly approved of. There’s something so traditional about their approach to hard rock that feels revelatory. There’s no gimmicky slight of hands, just straight up conviction to delivery. It’s raw, it’s real and a testament to their aesthetic integrity.” – THE GIRLS ARE
“A Raw Youth aims to sabotage meathead rock and succeeds. Le Butcherettes preserve all the best parts – the rush, the muscle, the vocalist as GOD – but expose the celebrated macho ego as a terrorising other.” – DROWNED IN SOUND
ipecac.com
twitter.com/lebutcherettes
www.facebook.com/LeButcherettes
lebutcherettes.net 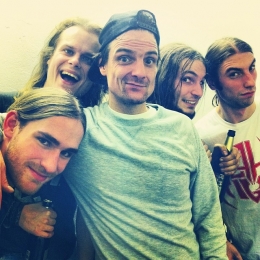