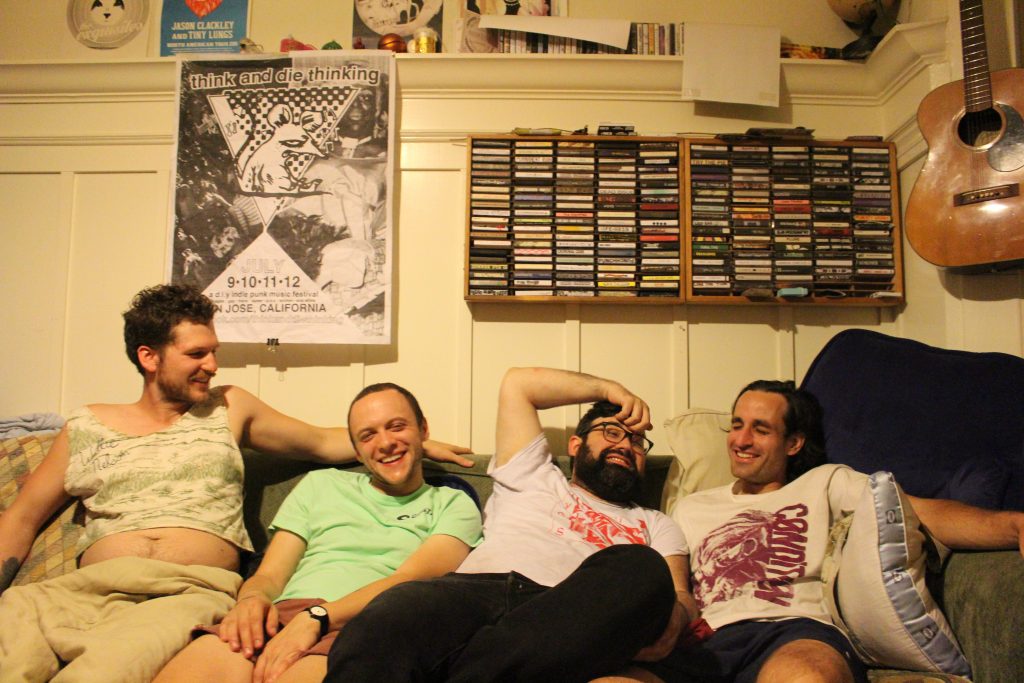 The Exquisites have just announced their new LP Home, coming out October 14th viaAsian Man Records. The band is streaming their first single “Faith” via Brooklyn Vegan. Pre-orders for Home are available now via Asian Man Records.
Stream “Faith” via Brooklyn Vegan.
Growing up, The Exquisites’ frontman Jason Clackley never knew the meaning of the word home.Clackley’s youth was characterized by tragedy—his father and grandmother died in the same year, when he was only ten years old. “Growing up, I lost a lot of my concept of home, through my father and grandma’s death,” he says. “It felt like the beginning and the end of The Godfather.” This domestic anxiety has followed Clackley into adulthood, but now largely manifests itself in the form of failed relationships.

Although when Clackley sings about romance, his tone isn’t self-pitying. So many of The Exqusiites’ peers in the modern pop-punk scene unwittingly write the same song over and over again. Even if we’ve ostensibly reached a new era of social consciousness in punk, the scene’s flagship acts are still an echo of Warped Tour juvenilia. Clackley knows that his romantic pratfalls are the result of his own overeagerness to commit—an abstraction of the little kid in his heart just aching for a home.

This wistful, ineluctable ache belies Clackley’s punk bravado, often serving as the emotional underpinning of his best material. On “I Can See”—one of The Exquisites’ most popular songs, according to Spotify statistics, although the group seldom play it live—Clackley recalls his youth, when everything came easy and love felt important. “Losing” off the group’s sophomore LP Selfish Feelings is probably the songwriter’s most straightforward admission of craving domestic security—“I want to get married / I want to be happy”, he sings.

On The Exquisites latest record—aptly titled Home—Clackley confronts his traumas head on, instead of merely searching for the next anesthetic. In “Home No Home”, Clackley Sings, “Obstruction has a mold, an endless, tiring sea / A complicated mess, a constant need”, a sentiment that perfectly sums up his existential ennui. In “Count On Me”, Clackley bemoans the fact that love—no matter how real or sincere—is ultimately limited by worldly affections. “I can paint a picture, it’s the pretty one yes it is / I can pick a flower too / It’s something, what else I can?” he sings. These themes of dimming innocence are perfectly reflected in the album’s cover: a grainy photo of drummer Gavin Bowes as an infant with his dad that looks like it’s from a totally different world. And in many ways, it is.

While Home might tread some pretty heavy lyrical territory, it’s a little more subdued than previous Exquisites releases sonically. The Exquisites have traded the noise-rock affectations and dimed-out Marshalls of Selfish Feelings for cleaner tones and more succinct arrangements that bring to mind The Cardigans or Grand Prix-era Teenage Fanclub over any exhumed ’90s emo band of the moment. Clackley’s seventh chord-heavy compositions are punctuated with tasteful horn arrangements owing to the musician’s deep-seated love for classic soul and pop. But the highlight is the vocals: Clackley’s emotive and powerful voice is completely unparalleled in the modern punk scene, an arena with far more monotonous whiners than technically-proficient singers. His signature croon—which is reminiscent of major soul icons like Sam Cooke and Wilson Pickett—has a decidedly classic quality to it, but never comes off as derivative or amenably “retro” (see: Daptone).

The album ends with the slightly optimistic piano ballad “Send a Word Home”—perhaps the closest thing there is to a title track on Home. “You can call whenever you need,” he reassures his subject, or perhaps, the listener. Despite his solipsistic angst, Clackley is still a reliable shoulder to cry on, and his music is a panacea for the similarly brokenhearted. “We were made to grow / To quantify the love in our soul”, he sings.

Jason Clackley might still not know the meaning of the word home, exactly—but he’s well on his way.