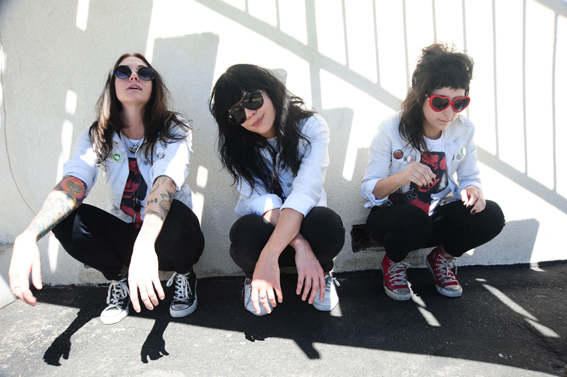 The Coathangers latest album, Nosebleed Weekend,
is out now on Suicide Squeeze Records
Check out the gorgeously filmed, new video for “Perfume!”

“Who knew that even in punk, practice could make perfect?” – SPIN

“…the group’s best so far!” – NPR’s All Songs Considered

“The Coathangers are mad as hell on Nosebleed Weekend.” – The FADER

“…the trio consistently pushes itself into new territory with every release.” – Interview Magazine

“Though they may have lived a decade-long adrenaline rush, The Coathangers’ persistence and motivation is as present as ever on Nosebleed Weekend.” – She Shreds

“…spiky garage rock guitars and a clap-along chorus that bridges the gap between power pop and no wave dissonance.” – Consequence of Sound

“Much like their Atlanta-scene peers Black Lips, The Coathangers have morphed from their shambolic punk beginnings and expanded their sound to encompass garage and pop.” – LA Weekly

Be leery of any punk band with initial ambitions that go beyond just playing shows with their friends. Sure, great bands ascend beyond basements and handmade demos all the time, but the best acts start with little consideration for the outside world. The groups are their own insular worlds, where the reward comes from the process, not accolades and riches. And the bands that thrive on their own artistic satisfaction usually wind up being the bands that are able to grow beyond the donation jar into sustainable successful musical careers. Their charisma is contagious, their songs exist outside of fads, and their spirits can weather the inevitable ups and downs of life as touring musicians. Such is the case with the Atlanta trio The Coathangers. 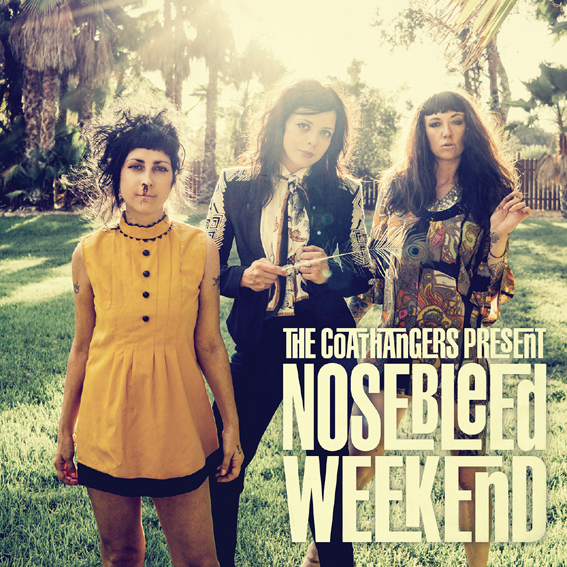 When The Coathangers started up in 2006, their aspirations were humble. “I think all bands in their early twenties start for fun,” says guitarist/vocalist Julia Kugel when talking about their early years of cheeky no-wave and irreverent garage rock. But Julia and her bandmates Meredith Franco (bass/vocals) and Stephanie Luke (drums/vocals) were serious about their craft, and that combination of modest outside expectations and absolute dedication to their music made for exhilarating live shows and contagious records. Ten years later, The Coathangers are still going strong, and while their palette has expanded over the years to touch upon hip-shakin’ classic rock, soulful country ballads, and golden oldies pop, their primary attack strategy still relies heavily on the jagged hooks and boisterous choruses of their formative years. Their fifth album Nosebleed Weekend retains all the devil-may-care magnetism and serrated instrumentation of their debut, but it flourishes with a decade’s worth of songwriting discipline and chemistry.

Nosebleed Weekend kicks off with “Perfume”, a song that marries sultry pop vocals with toothy guitar riffs in a manner that would make Ann and Nancy Wilson proud. It’s hard to imagine The Coathangers writing a song this accessible in their early years, but in 2016 it fits perfectly into their canon. From there the band launches into “Dumb Baby”, which harkens back to the gritty neo-garage rock of Murder City Devils. Longtime fans who still clamor for their brash post-punk angle will be immediately satiated by “Squeeki Tiki”. And after hearing the noisy loud-quiet-loud bombast of “Excuse Me?” it’s no wonder that Kim Gordon has become an outspoken fan of the band. It’s an eclectic album inspired by life on the road, lost loved ones, and Kugel’s recent move to Southern California. “We always say that each record is a snapshot of our life at the time,” Kugel says. “As far as style… it’s just what came out of us at that point.” So whether it’s the foreboding garage rock of the title track, the post-punk groove of “Burn Me”, the stripped-down pop of “I Don’t Think So”, or the dynamic grunge of “Down Down”, The Coathangers command their songs with passion and authority.

The biggest departure for Nosebleed Weekend was the recording process. While all their previous albums were recorded in Atlanta at The Living Room with Ed Rawls, their latest album found the band out in California’s North Hollywood at Valentine Recording Studioswith Nic Jodoin. “The Beach Boys and Bing Crosby both recorded there!” Kugel says excitedly. “It was an amazing experience, not to mention a ghostly one too. The studio had been custom built by Jimmy Valentine and he was very protective of his passion. It sounds weird, but his spirit was there, checking in on us and fucking with us a bit.” Nosebleed Weekend was the first session at Valentine Recording Studios since Jimmy’s professional interests were diverted elsewhere in 1979. The studio doors were shut, capturing a time capsule of the LA music industry back in the ‘70s. Thinking back to the early years of The Coathangers, it’s hard to imagine the scrappy Southern ladies ever recording in a historic studio in the San Fernando Valley, but it’s a classic demonstration of what can happen when humble young punks stick to their guns.