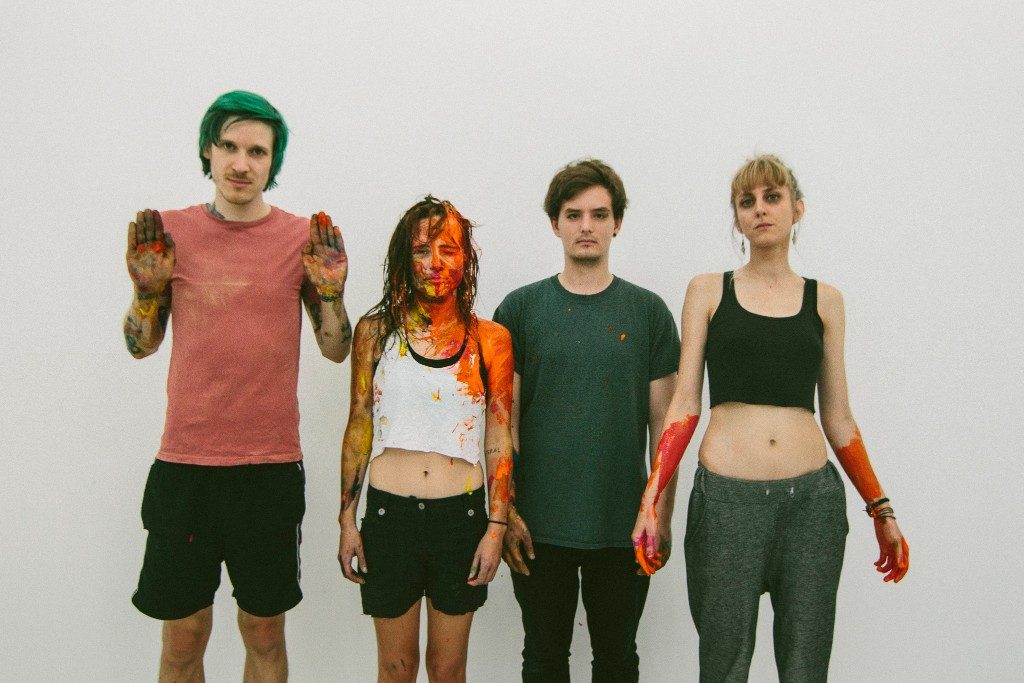 Petrol Girls will release their debut album ‘Talk of Violence’ via Bomber Music on 18th November, 2016. The first single to be revealed is the caustic ‘Phallocentric’, complete with multi-coloured music video. Vocalist Ren Aldridge explains the thought processes behind the track – “’Phallocentric’ came out of a conversation I had with a female friend about how uninspiring most of our experiences of sex with men were and how much our sex lives had improved the more we rejected heteronormative approaches. I really don’t think that’s a reflection on those men as individuals, but more to do with our whole society’s attitude to sex. Everything from sex education in school to representations of sex in mainstream culture seems to focus on male pleasure in heterosexual sex. The definition of phallocentric is, “focused on or concerned with the phallus or penis as a symbol of male dominance,” and this can be seen in art, architecture, advertising – all over the place. Culture doesn’t just reflect our values, it also produces and maintains them, so this song, as part of the counter culture, is literally saying “fuck what they taught us,” ridiculing conservative attitudes and celebrating the full rainbow of sex. “I can’t get no” is also a deliberate play on the Rolling Stones song ‘Satisfaction’. Mick Jagger definitely used his sexuality as part of his performance, and this song is also partly claiming my right to do the same. Whilst the song is mostly celebratory and irreverent, it also points out that “I take the shame take the blame take the pain and it’s not right” which comes from my experiences as a woman in a society that still judges women for their sexual behaviour in a much more negative way than it judges men.”

Petrol Girls combine manic jagged rhythms with vocals that range from furious screaming to intricate melodies and harmonies. Influenced by Refused, White Lung, Bikini Kill, Fugazi, RVIVR, Propagandhi, At The Drive-In and War On Women, Petrol Girls have sculpted a sound and a performance that is not only explosive, but highly detailed and raucous. They identify as a feminist band and draw on personal experiences to challenge and ridicule sexism, as well as exploring wider political themes, such as alienation, mental health and the current anti-austerity movement. Sometimes desperate and sometimes defiant.

Petrol Girls are named after Pétroleuses, mythical women of the Paris commune who allegedly set fire to private property with Molotov cocktails made from milk bottles, and rejected traditional gender roles. Ren first heard about them in a talk on Women and Protest given by writer Laurie Penny. Petrol Girls first played in 2012 for a house show that Ren was putting on to celebrate International Women’s Day. This feminist context was essential for the band’s formation as within the wider music community at the time there was very little to encourage female participation. Liepa had never played bass before and played the first show after only two practices. A good friend, innovative guitarist Joe York, saw potential in the band and joined shortly after. Petrol Girls started gigging with a variety of different drummers until meeting Zock (who also fronts Austrian punk band Astpai) and cementing their line up.

In February 2016 the band signed to Bomber Music and released ‘Some Thing’ – the 7” sold out almost immediately. In May this year they recorded the debut album and following its recording, the band moved out of London to concentrate on their endeavours full time and are now based mostly in Graz, Austria, where rooms are dry, warm, half the rent and double the size.