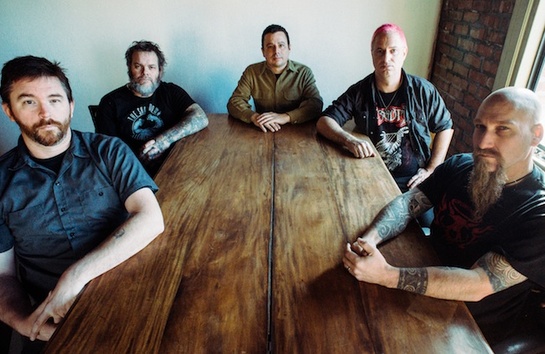 NEUROSIS’ ELEVENTH LP FIRES WITHIN FIRES PLAYING AT NOISEY
ALBUM OUT NOW
A massive milestone in the ongoing and unstoppable legacy of Neurosis falls into alignment as the band unveils their eleventh studio album, Fires Within Fires, through their own Neurot Recordings today. The entire record (produced by Steve Albini, and featuring cover artwork by Thomas Hooper) is now streaming worldwide through Vice’s music channel, Noisey.
STREAM NEUROSIS’ ENTIRE FIRES WITHIN FIRES LP
Neurosis continues to book additional upcoming live performances around the release of Fires Within Fires, adding several new shows to their tour schedule.Following the previously-announced London shows with Earth November 7th and Discharge and Subhumans November 8th, and two shows in Portland with labelmates Yob and Kowloon Walled City November 25th and 26th, the newest additions come in the form of two California shows in December, leading with a set in San Francisco on December 17th, also with support from Yob and Kowloon Walled City. The next night, December 18th will see Neurosis headlining the second night of The Power Of The Riff 2016, with six additional bands to be announced for the same evening. Two shows in Seattle and Vancouver follow, on December 19th and 20th, respectively, with support from Yob and Sumac.
NEUROSIS LIVE DATES:
07/11/2016 Koko – London, UK w/ Earth [tickets]
08/11/2016 Koko – London, UK w/ Discharge, Subhumans [tickets]
25/11/2016 Hawthorne Theatre – Portland, OR w/ Yob, Kowloon Walled City [all ages] [tickets]
26/11/2016 Hawthorne Theatre – Portland, OR w/ Yob, Kowloon Walled City [21+] [tickets]
17/12/2016 Regency Grand Ballroom – San Francisco, CA w/ Yob, Kowloon Walled City [tickets]
18/12/2016 Regent Theater – Los Angeles, CA @ The Power Of The Riff [tickets]
19/12/2016 Neumos – Seattle, WA w/ Yob, Sumac [21+] [tickets]
20/12/2016 Venue – Vancouver, BC w/ Yob, Sumac [19+] [tickets]
Neurosis take a dominant leap with their eleventh full-length, Fires Within Fires. Three decades in the making, and following 2012’s Honor Found In Decay, the album is a testament both to the history and future of Neurosis.
In true Ouroborean style, Fires Within Fires gives due to its predecessors while progressing forward into the unfamiliar and formidable. Striking Neurosis’ signature balance between light and dark, beauty and repulsion, dense sonic heaviness and reflective space. Fires Within Fires is succinct, raw and deeply soulful, an all-encompassing reminder to all that transfiguration in sound remains their most commanding and inimitable strength.  The journey of their music has found the band relishing the unpredictable, embracing the unknown and exploring the possibility of where the music was capable of taking them. Going beyond the remarkable, Neurosis has become unforgettable.
Fires Within Fires is the next powerful step towards a destination that has long been and continues to be the very heart of “becoming” for Neurosis.
Neurosis’ Fires Within Fires  is released worldwide today on CD, LP, cassette, and all digital platforms; see the wide array of ordering bundles and options via the Neurot store.
““Fires Within Fires is the summation of thirty years of experimentation in tonality and texture. Yes, Neurosis are firmly positioned within the extreme metal underground yet their music, with its ability to generate images of beauty akin to those many of us have experienced in our own lives – not to mention the loss that accompanies them – challenges this categorization. This is the band’s aim; to confront the listener and through sharing their own experiences and impressions offer a template to explore the profundity and profanity of our past and future lives.” – THE WIRE
“”Fires Within Fires sees Neurosis evoking both the primitive elements of their early years and the polished grace of their current form. A worthy addition to their legacy, their fire burns on.” – TERRORIZER
“Every monstrous sludge riff gnashes menacingly for the right amount of time and every delicate moment of folk-inspired drift is emotionally exacting. This duality occurs as naturally as the daily ebb and flow of the tides or the unexpected eruption from an ancient volcano. Such efficient songwriting is only possible after years of careful musical and vocal refinement, and as expected, plenty of concentration is required to absorb the subtle intricacies throughout. While in contrast, immediate primal satisfaction is experienced whenever these five veterans coalesce into a world-devouring groove, as apocalyptic mantras roar down upon us. Spiritual, inexorable, a seismic force of nature – Neurosis continue to create art without equal, and Fires Within Fires is another worthy addition to an awe-inspiring canon containing a number of truly pioneering and timeless albums.” – METAL HAMMER
“Neurosis have redefined what heavy meant and what heavy could be, all while refusing to define themselves as anything more than conduits for the music they conjure like diviners. Now releasing their eleventh LP, Fires Within Fires, they’ve ascended from the trappings of youth to alter the landscape of heavy music like the violent shift of tectonic plates.” – DECIBEL
“Neurosis have been endlessly creative and relevant for every stage of their now three-decade career… Every part of their discography is essential, and this will be another welcome chapter in their story.” – ALTERNATIVE PRESS
www.neurosis.com
www.facebook.com/officialneurosis
www.twitter.com/neurosisoakland
www.neurotrecordings.com
www.facebook.com/neurotrecordings