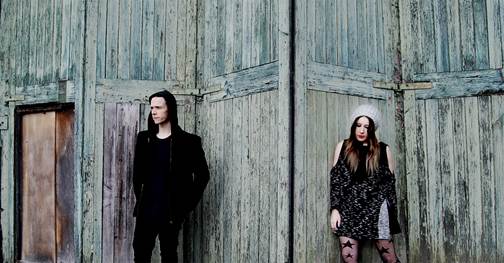 “Matching a beautiful evocative vocal from Jessica English, the ethereal passages are linked to some scorched electronics.” – Clash Magazine

“Atmospheric and introspective music for the masses” – Female First

‘Autumn’ is out on September 16th and follows on from their successful debut, ‘Skylines’. This new track combines a distinctive fusion of ethereal vocals, electronic rhythms and unique compelling instrumentation. The song was recorded by the band and mixed and mastered by Chris Coulter (Arcane Roots, Arctic Lake, In Dynamics).

“Autumn explores the pain of unrequited love” Lloyd tells us, “and the changes we experience after finally leaving it behind.’ This was one of Jess’ solo songs that never truly saw the light of day, the challenge was then how to make it a Living Dead Girl song but still maintain that feeling of vulnerability and hope. The result is probably our most optimistic song but one that still feels very natural for us.”

Both growing up in a creative atmosphere, English was classically trained in piano and vocals, while Lloyd took guitar into successful industrial rock groups such as Ventenner. The two would work together for the first time in 2014, finding common ground somewhere between trip-hop, rock and electronic music. This unlikely meeting of styles would lead to the creation of the group’s dark yet accessible pop music, delivered with themes that move between fantastical escapism and pained reflection, leaving a classically haunting aftertaste.

Expertly merging 80s new wave influences with the likes of Massive Attack and Portishead, Living Dead Girl are treading their own unique path, one they intend to do so all the way to the top.

And So I Watch You From Afar- Search:Party:Animal SINGLE