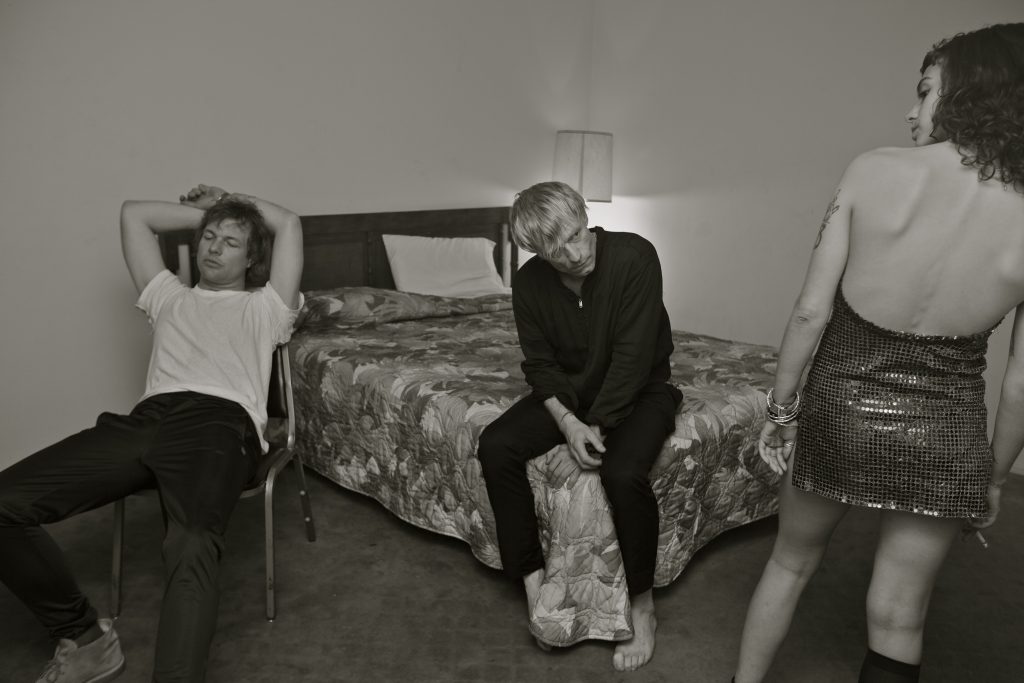 Starting out as a think-tank music and art project by the meeting of two fertile and febrile minds, Collapsing Scenery began their mission in LA warehouses and basements spreading their dark and noisy electronic sound to those in the know. This week they stream Metaphysical Cops, the lead single from their debut UK EP, God’s Least Favoritescheduled for release on Metropolitan Indian Records on September 23rd.

Made up of NYC guitarist Don De Vore (Ink & Dagger, The Icarus Line) and LA singerReggie Debris, Collapsing Scenery bonded whilst watching predator missiles rain on Middle Eastern heads. As TV stations poured out obscene coverage, the duo assembled a stash of analog electronics: samplers, step sequencers, synths and drum machines, all supplemented by effects pedals. Following the addition of Chris Colley (who previously held sticks with The Strokes’ Albert Hammond and School Of Seven Bells), the trio started looking further afield, built their own sound-system to recreate and expand on their studio work in a live environment and hit the road.

In a genre often lacking in lyrical bite, theirs is electro music with meaning and purpose. It flexes the head as well as the heart. The EP leads with the taut post-punk electro single Metaphysical Cops, a techno inspired opus whose title takes inspiration from Russian-American novelist Vladimir Nabokov, specifically this quote from ‘Pnin’: “Metaphysical police can break physical bones.” The body of the lyrics were inspired by the great Harpers piece ’Straight Man’s Burden’ by Jeff Sharlet, and they muse on the culpability of segments of the U.S. religious right in the implementation of Uganda’s horrific anti-gay laws. It considers the very real consequences of invidious and extremist American ideologies which, struggling to find a foot-hold at home, are transplanted into new territories.

“It’s a comparative examination of two modes of so-called spiritual communion, one based in love and truth, and the other in fear and violence,” explains Debris. “We recorded the track in complete darkness wearing military issue night vision goggles on a ranch in rural Texas.”

Collapsing Scenery shipped their own sound-system around Europe last month, playing debut shows in Paris and London. “We want to play in basements, warehouses, garages – and traveling with our own sound-system, power supply and visuals, that’s exactly what we do,” says De Vore. “Not being beholden to club promoters or the existing way of doing things is important. We’re 100% self-contained.”

Collapsing Scenery offer a new vision for how a modern band can be. They’re not even a band – they’re curators of a series of planet-planning events, expressions, exhibitions, albums, installations, journeys, adventures and parties, all operating outside of the confines of the tired, traditional industry.

God’s Least Favorite EP will be released on vinyl and digital download via Metropolitan Indian Records on September 23rd with a drum remix from Diamond Terrifier and M. Baharie Cliff and another from The Big Pink.

Pre-order the vinyl at http://shop.collapsingscenery.com/collections/music/products/god-s-least-favorite-12-ep-pre-order and look out for Collapsing Scenery playing live in the UK at the following shows.