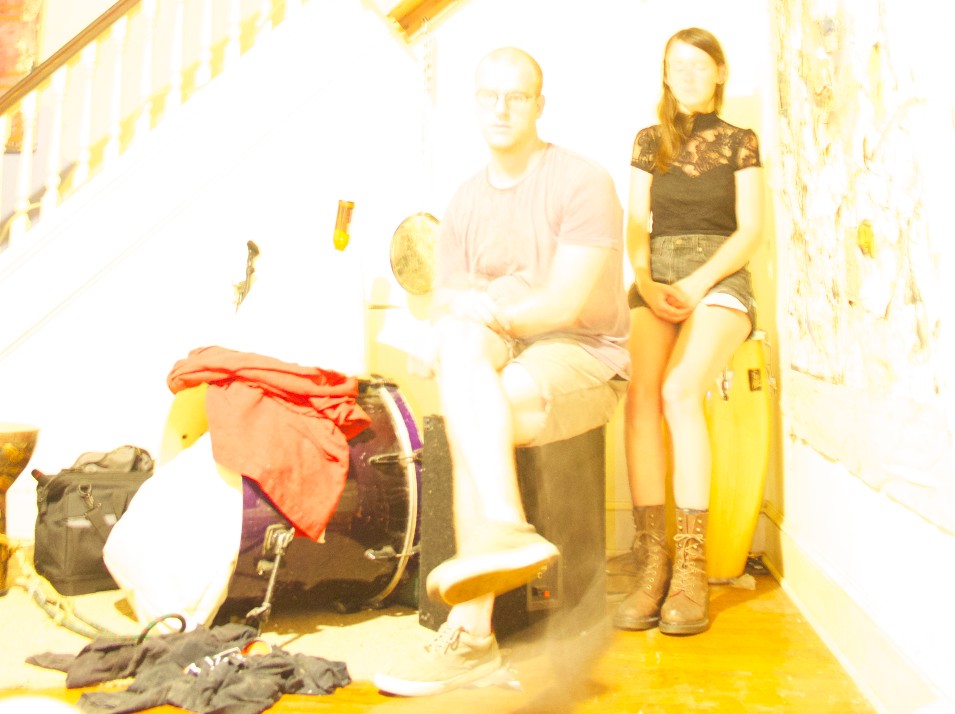 Due Out September 23rd via Exploding In Sound Records

Fond Han, the unpredictable New Jersey duo of Thomas Baumann and Kira McDonald, are streaming their full length debut Sham Cloud today on CLRVYNT. Due out September 23rd on Exploding In Sound Records (Palehound, Krill, Ovlov), the band’s brilliantly spastic record was recorded together with Phil Connor at New Brunswick’s In The West and mixed and mastered with Alex Molini in Brooklyn. Blending elements of post-hardcore, indie rock, fuzz pop, and noise punk down into a pulp, Sham Cloud is an inherently strange listen crafted into something accessible and undeniably interesting.

CLRVYNT shared, “Fond Han sound like what would happen if you left a bunch of your records out in the sun and let them cook for way too long, melting into a weird amalgamation that somehow manages to keep playing. The New Jersey duo’s sound is constantly revolving and evolving, invoking spikes of contemporary indie rock, insane old-school screamo and post-hardcore beats … All these personalities and styles come into play on Fond Han’s new record, Sham Cloud. Opener “Rink Brat” is a sonic kick in the teeth, like Daughters on their angriest day. From there, the intensity somewhat mellows, but the record never loses its weirdness”. They conclude, “the album is a cohesive and varied listen, an eight-track explosive that’ll keep your ears pricked for what the band does next.”

Drawing influence from a diverse spectrum of music that includes DIY peers, spastic art metal bands, and the kitchen sink of popular heavy music and dynamic indie rock, Fond Han are unpredictable by nature and their songs are vibrant as a result.

Back in 2014, Fond Han released their debut EP, a split cassette with Mattress Financial(Two Inch Astronaut’s Sam Rosenberg), but a lot has changed for Thomas Baumann’sproject in the years since. Originally a lo-fi solo endeavor, Fond Han quickly expanded into a band as Baumann was joined by Kira McDonald and a revolving cast of musicians. Still raw and weird, the band’s sound has been fleshed out and fully realized.

Sham Cloud offers a look into one of the most vibrant art punk bands within New Jersey’s ever strong DIY scene. The album, comprised of eight tracks in just under twenty minutes, mixes the band’s love of bummed out indie rock, mathy emo-tinged punk, and spastic metalcore interludes for something both genuinely beautiful and unflinchingly chaotic. Full of jagged rhythms and twisted riffs, Fond Han have created an intelligent and energetic record with enough tongue-in-cheek charm to keep things light and cheery.

Baumann and McDonald wrote and performed the record with guest appearances fromSteve Hartlett (Stove/Ovlov), Devin McKnight (Speedy Ortiz/Grass Is Green), Alex Molini (Jackal Onasis/Stove), Vinnie Daidone, and Zachary Miller (Sick Shit), and it’s safe to say the album is nothing if not unpredictable. Eager to explore the boundaries of post-hardcore, punk, indie, and art rock with an absurdist mentality, this one is sure to catch a few folks off guard.