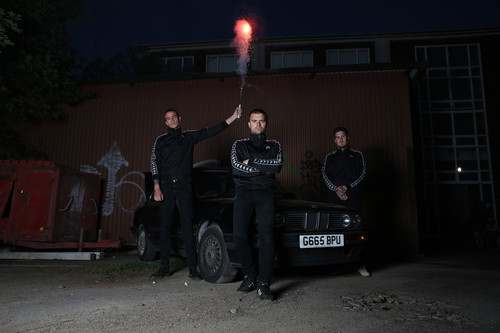 BLISTERING DANISH HARDCORE TRIO HALSHUG PREMIERE ‘VOLD’
FROM THEIR SORT SIND LP, OUT ON SOUTHERN LORD 30 SEPT
With Copenhagen-based Halshug’s new Sort Sind full-length approaching release through Southern Lord, they have released a gritty new track from the album.
The overall theme of Sort Sind is inspired by the members’ experiences growing up in the 1990s and 2000s in neglected parts of Denmark, hoping to in some way contribute to their scene and invoke some energy in those who hear it. Fitting into this storyline is the track ‘Vold,’ which translates to violence, and according to the members of Halshug is about psychic terror.
THE PREVIOUSLY RELEASED TRACK ‘UDSKUD’ IS ALSO AVAILABLE TO LISTEN TO
Halshug’s second album Sort Sind delivers nine ripping new tracks, the album’s title translating to “black mind.” A brutal rock record, Sort Sind bears hints of motorcycle-fueled d-beat while still retaining the raw punk that made the sound on their Blodets Bånd debut so potent, the songs showing an even more destructive and elevated approach to their songwriting. Recorded live, produced and mixed at Ballade Studios by Lasse Ballade, who also produced and mixed Blodets Bånd, the Sort Sind LP was mastered by Brad Boatright at Audiosiege.
Following their recent performances at Roskilde Festival and their debut East Coast US tour back in August, further live shows from Halshug are impending, including a record release show on October 7th and more. Find out more below…
HALSHUG LIVE:
07/10/2016 BumZen – København, DK *record release show [info]
24/11/2016 Stubborn Fest – Barcelona, ES [info]
Southern Lord will release Halshug’s Sort Sind on CD, LP, and digital platforms on September 30th. Preorders can be placed via the Southern Lord store.
“It’s made of monster riffs, thundering percussion, body-moving bass, and skin-stripping vocal fury. There’s a sense of physical power and bodily impact in the way the music hits the ears. It’s supercharged with energy — and yes, it is indeed a violent kind of energy, with an almost anthemic aura. The song will also get its hooks in you — it’s an infectious piece of hardcore punk as well as a battering one.” – NO CLEAN SINGING
http://halshug.blogspot.com
https://halshug.bandcamp.com
https://www.facebook.com/halshugcph
http://www.southernlord.com
http://www.southernlord.bandcamp.com
http://www.facebook.com/SLadmin