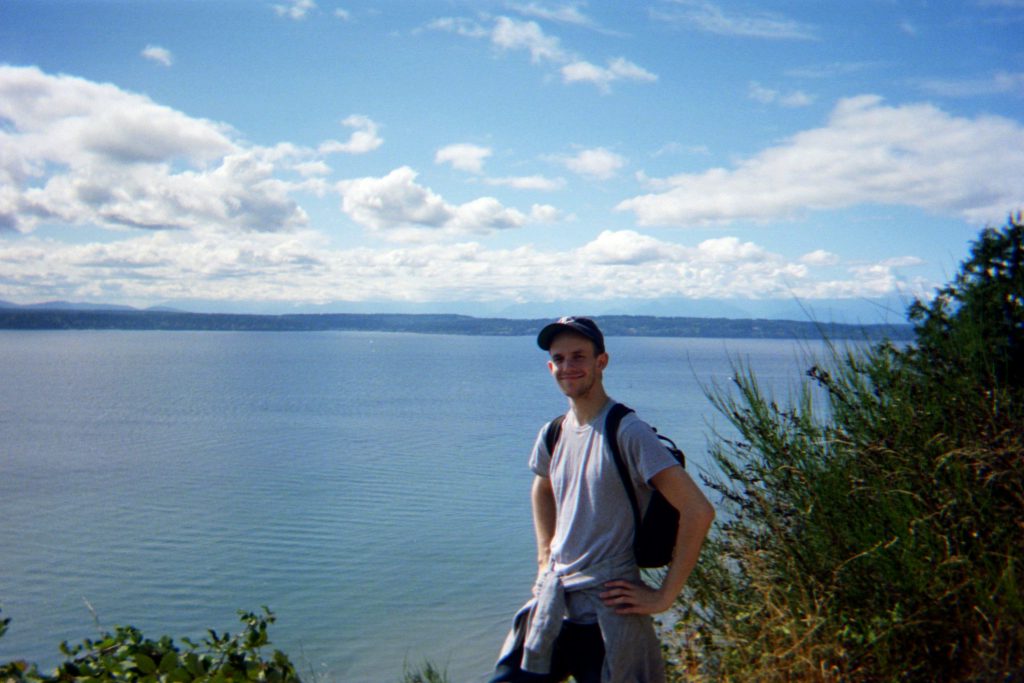 Space Mountain is excited to announce the release of Big Sky, the third full length fromCole Kinsler’s Boston based bedroom pop project. The album is due out August 26th via Kinsler’s own Dust Etc. (Dust From 1000 Yrs, Harmoos, Normal Person). Impose Magazine is sharing the premiere of “Faded Blue,” the record’s second single, a gorgeous folk inspired song with a longing for outer-space. Having released a new album each year since 2013, Space Mountain’s music continues to take new shape with each release, blending heart on a sleeve indie rock with lush bedroom pop and guitar solos that are both vibrant and soulful.

While lead single “Never Lonely” featured Kinsler joined by Forth Wanderer’s Ava Trilling, “Faded Blue,” finds Kinsler back at the forefront and his songwriting is a radiant as ever. The song deals with feelings of loneliness and helplessness as Kinsler sings of the world ending, picking up and moving on to the next. It’s an outer space song that truly hits home.

Speaking about the song, Kinsler shared, “[“Faded Blue” is] about a fictional character in the future who has to leave earth out of necessity, for a new place to live. “Fading Blue” is in reference to the fading of the pale blue dot that one would see as they floats away from earth.”

Impose shared, “Kinsler’s heavy vocals continue to lend themselves to the storytelling in the track, and it ends with the culmination of a really rad guitar solo. Slightly reminiscent of Johnny Cash, we’re big fans of the direction his sound is going in.”ABOUT SPACE MOUNTAIN:

Space Mountain is the project of Cole Kinsler of Boston. Initially inspired by the DIY music he discovered in college, Space Mountain now stands as a vehicle for his songwriting, in whatever directions it takes. Big Sky is Space Mountain’s fourth release, a bright and brilliant album of bedroom pop both weary and optimistic. While the project has served as an outlet for Kinsler’s songs primarily in recordings alone, Kinsler is looking to begin performing live around the release of Big Sky. Speaking about the record in brief, humble quips, Kinsler shared, “the set of songs on this one is pretty diverse in terms of mood and sound, so I hope most folks would find a song or two they really enjoy. There’s one duet, a couple instrumental tracks, one Wilco reference, some sad stuff, some happy stuff.” Space Mountain has found balance and the results are gorgeous, introspective, and timeless.

Recorded with just one microphone in Kinsler’s bedroom, he kept the process fairly straightforward and it shows in the record’s personal atmosphere and no-frills honesty. Inspired by the primitive guitar work of John Fahey and Jack Rose, Space Mountain’s new record shows growth while leaning toward folk music with as much focus on songwriting as the exceptional instrumentals.

While talking about the themes of the record, Kinsler shared, “I like to contrast small personal problems or questions with a larger awe of the universe. I started reading Proust while I was writing these songs, and I think his writing affected me a lot. I was thinking a lot about involuntary memory, the passage of time, and the value of art. I think I subconsciously included some “Proustian moments” in the lyrics just because the idea resonated with me so much. I like the idea of finding solace in the beauty and wonderment of life.”

“It trades on classical rugged exceptionalism … to tell a story that’s engrained in our collective unconscious … The “Never Lonely” of the title is an empty feeling and, on the last verse when Kinsler joins in with his deep monotone, their character runs into a friend and uses that connection as a way to get past her loneliness…” – Stereogum