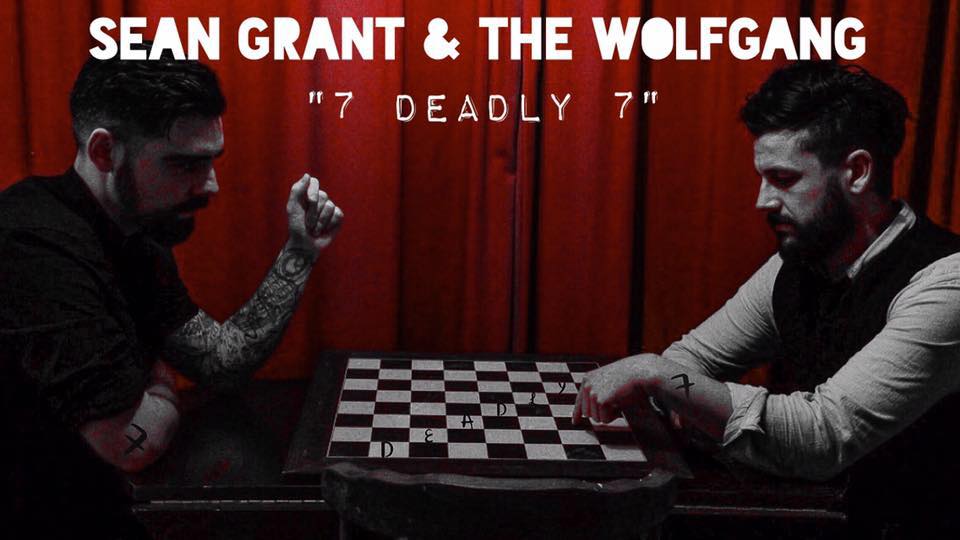 It’s hard to believe that we first introduced you to Sean Grant in a special introducing post 2 whole years ago. In a short space of time we have watched with admiration, this talented musician and his wolfgang grow. Developing their style over this time, developing their creativity and watching their opportunities and their fan base grow. We truly believe in the works of Sean Grant & The Wolfgang. No stranger to the site, Milton Keynes based folk/punk storytellers Sean Grant and the Wolfgang are such a thought provoking, powerful unity. Sean has been making music and writing from a young age and his development into a folk wordsmith and fronting Sean Grant and The Wolfgang is the culmination of many years experimentation and exploration.

Sean Grant & The Wolfgang consist of Sean Grant (vocals / guitar) and his wolves Steve Fiske (guitar / vocals), Phil Andreas (keyboards) and Matt Banham (drums). Hailing from what they deem as middle earth between Milton Keynes and Northampton, the act revel in a rabble-rousing brand of tightly wound rock’n’roll armed with beards, blazers and blisteringly rowdy tunesmithery, as evidenced by the fist-clenching fury of previous releases the ‘We The Working Class’ EP and the ‘War Machines’ EP. This band resonate in raw, honest, hard working musicianship. You can’t help but fall in love with their style, their projection, they will win you over, you’d be hard pressed not to engage in the wolfgang.

All the more surprising, then, that title track of their current ‘7 Deadly 7′ EP should turn out to be a so startlingly sombre. Comprised virtually entirely of gallant vocals and half-hidden keyboards it flashes back to a time when ‘Tiny Children’ by The Teardrop Explodes walked tall and therefore represents a dangerously beautiful choral moment.

“This track draws on experiences from school and church,” explains Grant. “I grew up around religion, but sitting outside of it looking in, trying to make sense of it all. It’s a dilemma, mainly as my mother is a Born Again Christian and my father an atheist, so I was given both views. ‘7 Deadly 7’ isn’t saying which is right or wrong, it’s an observation of a man who is looking for peace and quiet to fall into and take hold of him.”

When we first announced the release of ‘7 Deadly 7‘, we got so excited, the release features four new tracks all of which narrate man’s search for meaning in the modern world. For those dedicated fans you will all be familiar with those much loved traditional Wolfgang brand of howling melody and highly strung harmonies elsewhere the ‘7 Deadly 7‘ EP features three stridently rocking new songs with lead radio track ‘Brother’, ‘Best Of Men’ and ‘Take A Man’s Body’ all produced and mixed by Guy Massey (Spiritualized, Manic Street Preachers, Depeche Mode et al). Better still no fewer than three of the four EP tracks are accompanied by their very own videos which don’t shirk on the tombstones, burning flames, neo-gothic imagery and mad staring eyes, all of which previously featured on Circuit Sweet.

Once again Sean Grant has created such a vital and inspiring masterpiece. This record and this self titled single reflects the acts intense craftsmanship. This record should so easily give the musicians their own iconic status.

An unmissable act, an act we’ve found ourselves mesmerised by at their previous Nozstock Festival performance. You need to see the act live to truly appreciate how magical they are. Catch them live at the date below-