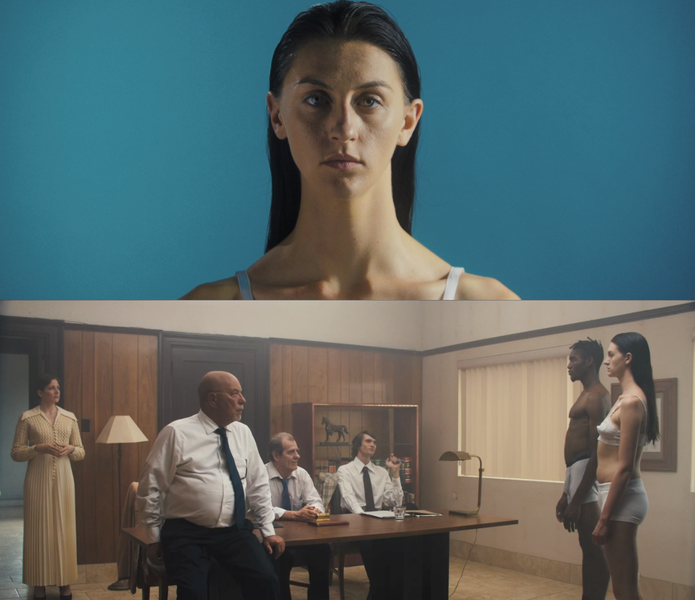 Odonis Odonis‘ latest epic, Post Plague, delivers a powerful blend of industrial, electronic and science fiction. OO’s post-apocalyptic anthems construct stark soundscapes and saturate them with layer upon layer of industrial grime and was released on felte earlier this summer to high acclaim from a variety of sites and publications including Pitchfork, NPR, THUMP, The Quietus & Drowned in Sound.

Today the trio release the first episode of multimedia short films based on Post Plague. They’ll continue to blend VR and traditional video to tell a larger fictional story. The viewer, begins in ‘Needs‘ by taking the trans-human leap transferring their existence into a barely functional AI robot and from there are pulled into an epic post apocalyptic journey into the not so distant future.

Director Scott Cudmore explains ‘Needs‘ is about “Old, entitled, white men and the system of oppression and exploitation that they’ve created to serve their…well…needs, which are usually money and power. I’m looking at this through the lens of science fiction, but I wanted to depict that power structure breaking down finally. Breaking down internally. There’s no linear narrative and you are free to think of that aspect in any way, but each image is a depiction of this breakdown as well as of repression, exploitation and desperation.”

Lyrically and conceptually, Post Plague is inspired by the technology-enhanced relationships of the very near future. Specifically, Iranian-American philosopher Fereidoun M. Esfandiary who In the 1970s, changed his name to the avatar-like FM-2030 and after his death in 2000, became the first person to be vitrified – a process one up from cryofixation. FM-2030 was also a huge proponent of transhumanism, the notion of the utilization of technology to overcome human limitations.

OO announce a full U.S. fall tour with Tobacco in support of Post Plague – full list of dates below.