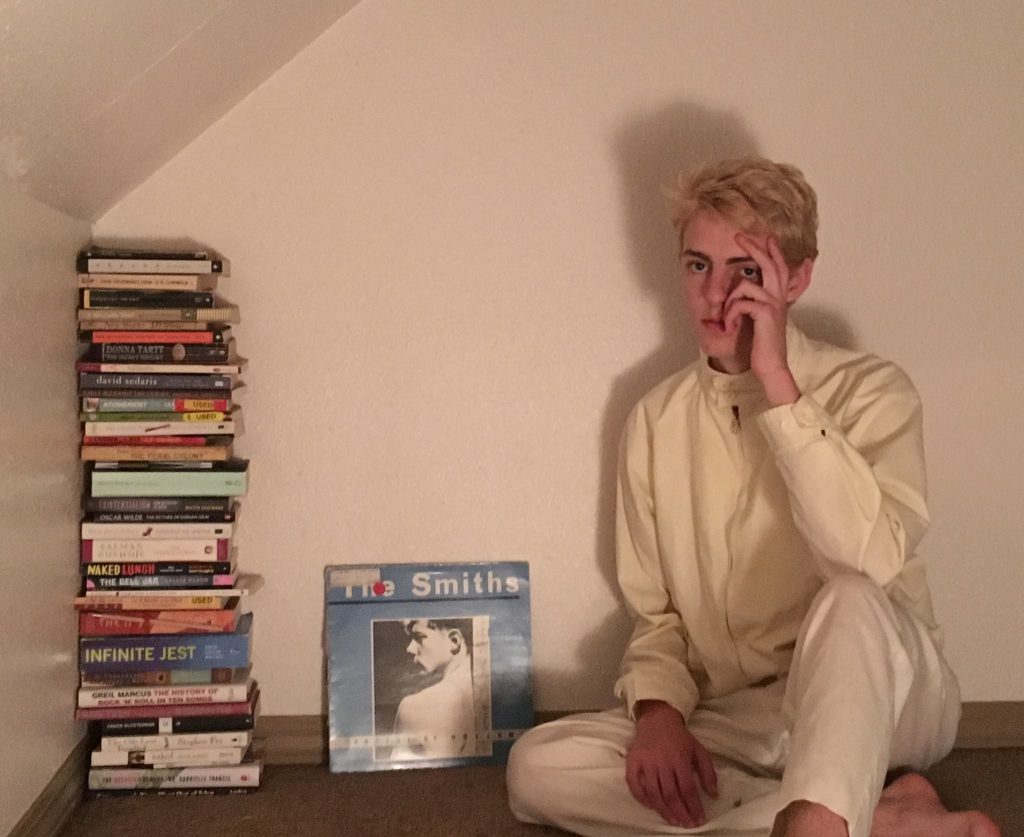 “Mondrian” Streaming Now via The Fader

Turtlenecked have announced their new record Pure Plush Bone Cage, coming out August 19th on Good Cheer Records. The band is streaming the first single off of Pure Plush Bone Cage, “Mondrian,” via The Fader. Pre-orders for the album are now available via Good Cheer Records.
Stream “Mondrian” via The Fader.
Some artists by nature prefer to record two-minute pop jewels, but turtlenecked – Harrison Smith – put pressure on himself to do it. “I wanted to see how many ideas I could cram into each song, so I think the weird unfurling nature of the songs is deliberate.” This is on his formerly, digitally-only, quietly self-released tour de force: Pure Plush Bone Cage .

And in this psychically claustrophobic panorama, the narrator and his restrictive world are in a feedback loop. See “Paranoia in Context”: “looking in the mirror / to see if you looked at me. / who looked at you? / no one, specifically,” explains our caught–off-guard hero furtively, or maybe obliviously. Then, somehow, there’s a seamless shift from a dusky Box Tops noir into a twinkle that’s more lucid (who’s twinkly these days… let’s say A Sunny Day in Glasgow). Which reveals itself to be quite appropriate when the lyrics follow suit, now breaching self-awareness: “the world only gets smaller / and then you become a stranger / a stranger to yourself / an unknown complainer.” And then, those two sounds from before meld together and it just makes sense.

The fruit of these thematic uncertainties are parsimonious arrangement and accessibly advanced melodies that would do a music theoretician proud, but turtlenecked, so as not to be anybody’s Ratboy Genius, makes music that fucking rocks. Sure, “Intro” uses what’s called a Lydian dominant scale, but only to get to the heart of its freaked-out feel. “Ultimately, I apply what I know about theory in conjunction with just trying to imagine how a certain feeling would translate to a note-based language to create these Frankenstein songs,” Smith explains, tellingly but not to his detriment.

Then the guitar sirens right on into “I Always Suspected I Was Watching Television,” to be quickly broken down into the album’s signature one-two punch of stark, invigorating guitarpeggios, which deftly sound more dissonant than they actually are, and heavy, percussive strums. Lyrically, it’s a loose-cannon consciousness leaping from one decadent vantage to another, 21st Century Schizoid Man–style, but CliffsNotes’d for the children of the oughts. In two minutes. “Oh, boys in frustration / with nonexistent limitations / still, he gets a pass / I see beheadings in masks // on HDTVs!” he condemns, his voice unhinging in all the right ways. Writ more abstractly but in the same vein, “Feline / Haunter” is a panicked fever-dream fueled by wheedonism gone wrong, then right again. It seems to say, I am terrorized by my mind, but also I am my mind. Weakness and power reign together.

Smith has been putting music online as turtlenecked only since September of 2015, but has five releases already. “I just churned out like 30 songs over the course of freshman year,” he reflects. Some of these became the cuts from differently adventurous “twisted legs.” Then followed its progeny, like synthier “the romantics” and new arrival “swish,” a split of sorts with the smooth, mysterious dj venmo.

But Bone Cage is at once the most unified and the most disparate. Plus, it’s the only one with proper capitalization, which has got to count for something, Smith majoring in English. (turtlenecked gets its composer chops from two short semesters of theory and some jazz guitar lessons. Nice ROI.) Talk about note-based language.

Speaking of language, it’s harder to write lyrics about fear than about love. “Mondrian,” smack in the middle of the 11 shorties, is indeed a mere song about love going sour, but the same dry wit as ever makes it work. “Charlie told me I can’t paint like Mondrian” could mean that our hero can’t respect boundary lines, or finish simple things, or mimic simple art. And what helps is that it’s truly perfect pop – understated but incendiary bass; a wailing guitar line descending beneath the infectiously elegant chorus; and a four-bar solo with a touch of arena rock sheen. Its bridge takes us a step back: “Still I sit with my pen and page / to twist our lukewarm romance / into a much more tired cliché.” The question here: what about our narrator is real, and what’s hyperbole? Art imitates love imitates art.

According to Smith, “Emulation was and still is really important to making music for me.” Maybe it’s him being T.S. Eliot’s proverbial thieving “great artist.” More likely, it’s the sincerest form of flattery. But he covers his tracks with prodigal capability. “Sometimes I just try to combine three artists I really love.” So which are in a given track? “Black Flag’s Nervous Breakdown” gives one away, but how about the others? Maybe II-era Billy Talent, or Fall of Troy… if they were prettier? Nah, it’s BF plus “Dirty Projectors, Joanna Newsom, and Animal Collective.” No big deal! “Some of my friends think I approach songwriting like a machine.”

Without an answer key, it’s hard to make quick comparisons. So how about, say, “Weakling?” Uhh, some Atom and His Package or Ima Robot or Mindless Self-Indulgence? Come to Daddy?? Bandcamp listener Cameron Crowell thinks it’s more “The Strokes covering OK Computer.” Let’s call this off. Maybe you can put turtlenecked in a cage, but not a box.