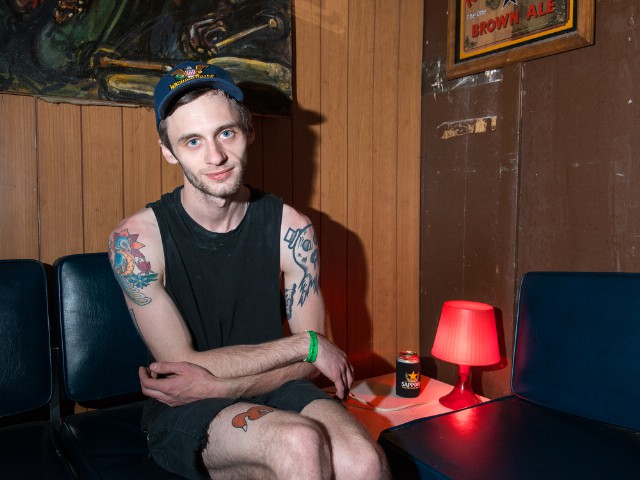 Brooklyn-via Boston singer/songwriter Soft Fangs released his new album The Light back in March via Exploding In Sound (cassette) and Disposable America Records (vinyl + digital) and now he’s returned with a new video for “The Wilderness”. One of the many highlights from John Lutkevich’s full-length debut, recorded in the attic of his childhood home in the suburbs of Massachusetts, GoldFlakePaint are sharing the video’s premiere.

Speaking about the video, GoldFlakePaint shared, “…a remarkably sobering listen, the kind of weary but heartfelt document that tends to stay with you as some kind of afterthought, like memories displaced perhaps or aimless stretches of time with nothing tangible to hold on to. Released today, the new video for ‘The Wilderness‘ takes this idea as its base and expands in a variety of captivating ways.”

Lutkevich expanded on the video’s concept:

“The video (which was shot in Owl’s Head, Maine) is based around aimlessness. When you’re a kid, you conjure up all sorts of imaginary things, purely because you’ve got nothing better to do. From aimlessness, something is created. I wanted to explore that, so we went to the beach with nothing planned & I dressed like a figment of my imagination. At the end of the day, we had a music video, and that seemed purposeful enough.”

ABOUT SOFT FANGS:
Raised in the outskirts of Massachusetts, now living in Brooklyn, Soft Fangs is the latest musical outlet of John Lutkevich.  His songwriting, which has been compared to the likes of Elliott Smith, Sparklehorse, Radiohead and Nick Drake, combines introspective and poetic lyricism with fragile guitar and haunting melodies.