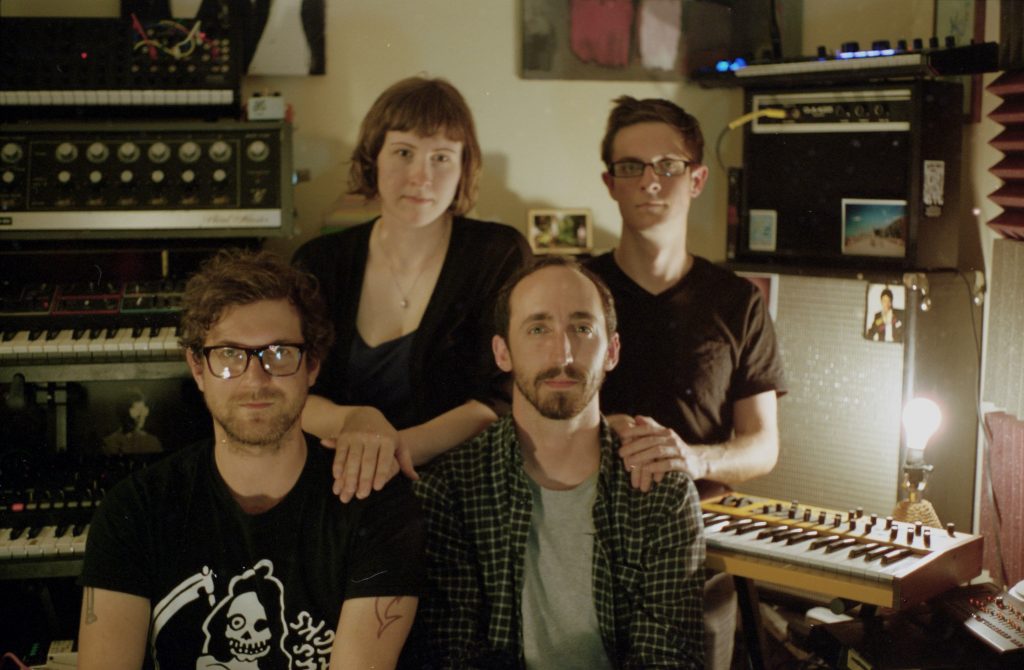 New Orleans’ synth-wave extraordinaries Sharks’ Teeth are excited to announce their new album It Transfers & Grows today via Stereogum with the premiere of the record’s first single “Don’t Touch My Feet”. Due out September 2nd on Gigantic Noise (vinyl) andCommunity Records (cassette), It Transfers & Grows is the part of a long prolific line of Sharks’ Teeth albums and yet it feels like a fresh start with the Tyler Scurlock led band forming into a cohesive mutant-pop synth quartet.

It Transfers & Grows was recorded using nothing but a room full of synthesizers and a keen sense for arranging rhythms from samples of just about anything. You will hear all kinds of sounds that these machines are able to produce, but the songs are formatted in a familiar pop style, hopefully grounding all the other worldly textures. Up until this record, the past 16 albums, EPs, and various recordings (there’s over 60 releases on their Bandcamp) were put together primarily by Tyler Scurlock, but over the past two years Sharks’ Teeth has grown to include the help of Devin Hildebrand, Emily Hafner & Shelby Grosz. What started as Scurlock drafting songs and suggesting parts for each member to play live, quickly became a collaborative process in which each member developed there original contributions, eventually leading to this album, the first to be recorded as Sharks’ Teeth: the band.

Speaking about “Don’t Touch My Feet,” Stereogum noted the bands ability to warp genres, calling it “A cosmic-funk feel plus pop-sensible melodies, random ambient-like interjections, atmospheric sweeps, and a dash of psychedelia evoke the feeling of retreating into yourself when in a touchy mood.”

Taking many shapes over the last 7 years and 16+ albums, Sharks’ Teeth has settled into a comfortable 4 member/7 synthesizer arrangement as they prepare to release their forthcoming 17th full length album and first ever vinyl release, It Transfers & Grows.

Recording the tracks for It Transfers & Grows in the comfort of their home studio in New Orleans, each sound either comes directly from organic samples of the real world or from the array of electronic equipment Sharks’ Teeth’s members have amassed over their short but obsessive collecting careers. All this to say as a disclaimer of sorts that though things in this world may seem too perfect or too right to be real, you can rest assured that no part of this record comes from the A.I. of modern music production software or the mind of a machine, just some hands on some synths twisting and turning the knobs into space.

Attempting to provide a suitable genre description for It Transfers & Grows leads to using ambiguous terms such as electronica or synth-wave, though Sharks’ Teeth simply describes it as, Christmas in Space. When the words “electronic music” can mean so many things, think more Duran Duran and less Deadmau5, more New Order and less new drugs at an EDM festival.

It Transfer & Grows is available September 2nd on 12” vinyl via Gigantic Noise and cassette via Community Records.