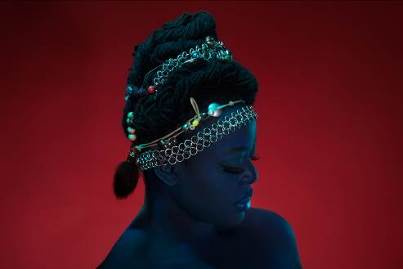 ESKA is delighted to announce a special live show at 2016’s Edinburgh Fringe Festival this August, in partnership with Nothing Ever Happens Here, Summerhall’s new live music initiative.  ESKA will take to the stage in The Dissection Room on the 26th August.

With a breathtaking live performance, an astonishing album and one of the most memorable voices in the UK right now, it is easy to see why the Mercury Prize nominee has been getting so much attention. No overnight success, it’s been a long road to the release of her extraordinary debut album.

When ESKA’s self-titled debut album was released in April 2015 on Naim Edge Records, the BBC Radio 6Music tastemaker Gilles Peterson proclaimed ESKA “the finest UK singer”, The Guardian dubbed her “enchanting… inventive” and The Independent called her “one of the most idiosyncratic and original talents”. The Zimbabwe-born, London-raised musician and songwriter took five years to make her album – “a mind-bending gem” (The Observer) – but it was worth the wait.

A singer whose unique voice has adorned the albums of such original acts as Nitin Sawhney, Courtney Pine and Tony Allen, ESKA’s been in high demand in recent years. But her own music is something else; imagine the psyche soul of Minnie Riperton, unexpected, whimsical melodic twists of Kate Bush and ornate detail of folk legends Pentangle arranged in an intoxicating meld, and you’re only getting close. ESKA has been compared to Joni Mitchell, earned plaudits from influential radio DJs Lauren Laverne and Don Letts, performed live sessions for Radio X and Radio 3’s Late Junction, and had everyone from The Times to hip dance music site Boiler Room in a lather.