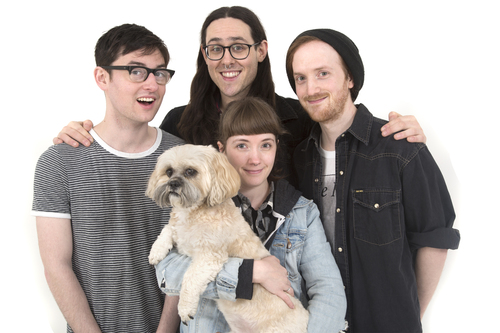 Watch Martha’s Surprisingly Sunny New Video For “Ice Cream and Sunscreen“
From new album Blisters In The Pit Of My Heart
Out this Friday 8th July on Fortuna POP!
Check out the video, premiered on Upset Magazine
Martha return with their second album Blisters In The Pit Of My Heart this Friday, via Fortuna POP! (UK/EU) and Dirtnap Records (US). Produced again by MJ from Hookworms, the album explores the difficulties in staying political, staying passionate and staying punk over the course of eleven expertly crafted pop songs. The band will be hitting the road in July, playing their biggest London headline gig to date at the Tufnell Park Dome on 22 July, with support from their pals Trust Fund.
A slow burner that suddenly explodes into life before ending with a rousing chorus of the album title, “Ice Cream and Sunscreen” is a tale of regret, as the band explain: “It’s song about getting it bad and getting it wrong. Romanticising something that doesn’t exist. It’s an acknowledgement of some of the more murky places your mind goes when you’re figuring yourself out. Acting like a teenager (whatever that means) in your mid-twenties.”
Hailing from Pity Me near Durham, Martha play energetic, impassioned power pop with intricate vocal interplay and lush four-part harmonies, informed by 90s indie rock and contemporary garage punk. The band is comprised of J. Cairns (guitar), Daniel Ellis (guitar),Naomi Griffin (bass), and Nathan Stephens Griffin (drums). All four members sing and write the songs. Daniel and Nathan also play in Onsind, while Naomi also plays in No Ditching. Their debut album Courting Strong came out in 2014 and was included in NPR’s top 50 albums of that year, winning them the epithet “One of Britain’s best rock bands”. Taking inspiration from such likely and unlikely sources as The Replacements, Heart, Billy Bragg,Thin Lizzy, Cheap Trick, The Go-Gos and Radiator Hospital, if the band’s first album, Courting Strong, was about punks growing up, then Blisters In The Pit Of My Heart is about grown-ups staying punk.
LIVE DATES:
JULY
8 – Leeds – Wharf Chambers
14 – Durham – Alington House
16 – Sunderland – Summer Streets Festival
17 – Glasgow – Audio
22 – London – Tuffnell Park Dome (with support from Trust Fund)
23 – Bristol – Exchange
27 – Durham – Empty Shop
AUGUST
5 – Derby – Hairy Dog
6 – Brighton – West Hill Hall
8 – Leeds – House Show
10 – Harrogate – Major Toms
11 – Kingston – Hippodrome
13 – Newcastle – Cluny 2
SEPTEMBER
2/3/4 –  End of the Road Festival, Dorset

“Ice Cream And Sunscreen” starts off slow and romantically sentimental but quickly ramps up to the sort of runaway energy that inhabits the UK pop-punk band’s best songs. It’s rousing and heartbreaking all at the same time, a headspace this band occupies well.” –Stereogum

“Ice Cream and Sunscreen” begins on a melancholy note, all grey weather, despondency, and lethargic guitars. With a stretched guitar note, the rest of the band suddenly joins in, transforming the stasis into affirmative passion, as singer JC yowls “You said you knew my star sign from the start.” Bassist Naomi Griffin jumps in for the final chorus, bringing a cheeriness to the repetition of their sophomore record’s title, Blisters in the Pit of My Heart.” – Pitchfork