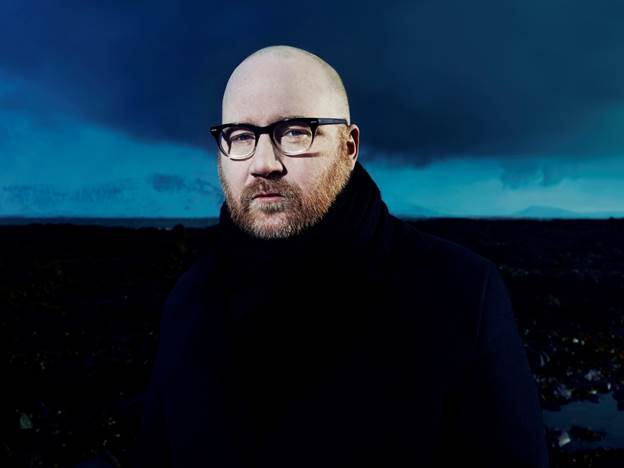 “A remarkable talent” Drowned In Sound

“A composer at the height of his exquisite powers” Mojo

Jóhann Jóhannsson, the Golden Globe-winning, Oscar, BAFTA and Grammy-nominated composer’s first album for Deutsche Grammophon, is a meditation on beauty and the process of creation.

Orphée traces a path from darkness into light, inspired by the various re-tellings of the old story of the poet Orpheus, from Ovid’s to Jean Cocteau’s. A many-layered story about death, rebirth, change and the ephemeral nature of memory, the myth can also be read as a metaphor for artistic creation – about the elusive nature of beauty and its relation to the artist, as well as the idea that art is created through transgression – by the poet defying the gods who forbade him, to turn back towards his beloved as he leaves the Underworld.

Orphée’s sonic palette is varied, combining acoustic instruments both solo and in ensemble with electronics and the mesmeric sounds of shortwave radio ‘numbers stations’. It draws on many facets of his previous albums, incorporating music for solo cello, organ, string quartet, string orchestra and unaccompanied voices.

Orphée shows the full range of the Icelandic composer’s remarkable invention and uncanny feeling for atmosphere. The music of the entire album is tied together structurally by recurring harmonic and melodic elements, yet each track sounds fresh, evocative and unique. Orphée reconciles ambitious orchestral and vocal writing with influences ranging from minimalism, baroque music and electronic music. Also influenced by film composers Bernard Hermann, Ennio Morricone and Michael Nyman (who, like Jóhann himself were equally prolific in composing concert music and film music), Jóhann is a contemporary exponent of a tradition that was shaped by composers such as Shostakovich, Prokofiev, Walton or Korngold.

“Orphée is for me about changes: about moving to a new city, leaving behind an old life in Copenhagen and building a new one in Berlin – about the death of old relationships and the birth of new ones”, explains Jóhann. “Perhaps this is one if the reasons I was drawn to the Orpheus myth, which is  fundamentally about change, mutability, death, rebirth, the elusive nature of beauty and its sometimes  thorny relation to the artist. This album, my first solo record for six years, is an oblique reflection on personal change.”

Although his compositions are often triggered by narrative or conceptual elements, Jóhannsson notes that Orphée began life rather differently. “The music arrived slowly and appeared ready to wait to discover its own form”. The album’s musical ideas, he continues, emerged from a series of simple, but memorable contrapuntal themes. “Many of them have some kind of ascending harmonic momentum. I spent a lot of time shaping these ideas into different versions and variations. They slowly mutated over a long gestation period of several years and were transformed and transfigured into the individual pieces on the album.”

One of these pieces seemed “to ask for vocals” and the composer was drawn to the text of Ovid’s Metamorphoses, and the poet’s version of the Orpheus myth, whose multiple meanings offered Jóhannsson a rich source of inspiration. He was also reminded of a more recent retelling – that of Jean Cocteau’s Orphée. The film, released in 1950, depicts Jean Marais as a modern-day Orpheus listening obsessively to cryptic messages emanating from the radio of a Rolls-Royce. “The words sound to him like strange, repetitive avant grade poetry, punctuated by shortwave noise-bursts”, the composer notes. “They reminded me of the mysterious ‘numbers stations’ that broadcast coded messages during the Cold War and appear still to be used by intelligence agencies today. In homage to Cocteau and to my new city – which was on the Cold War’s front line – I began to incorporate recordings of these strange shortwave broadcasts, with their haunting and enigmatic lists of numbers, letters and coded messages into my music.”

Orphée is a haunting and atmospheric musical journey, crowned by the sublime Orphic Hymn –  performed by Paul Hillier’s Theatre of Voices using Ovid’s text. The album is a reflection on change, memory, beauty and art, and ultimately celebrates the latter’s power of renewal, while acknowledging the dark paths along which it can lead the artist. “Making Orphée has been a true labour of love, one that has been a part of my life for six years, and yet the music always remained fresh – it was constantly in a state of flux and renewal.” its composer concludes.

Jóhann is a figurehead in a dynamic and developing scene of composers who move freely and inventively between film scores, minimalist classical, ambient and electronic music. He is equally at home writing commissioned works for the Icelandic Symphony Orchestra, Bang on a Can and Theatre of Voices ensembles, as he is collaborating with Tim Hecker, Hildur Guðnadóttir, Pan Sonic, CAN drummer Jaki Liebezeit, Marc Almond, Barry Adamson, and Stephen O’Malley of Sunn O))).

Requests from filmmakers to use Jóhannsson’s music in their films has led to a flourishing career in writing original music for more than a dozen movies. Jóhannsson was awarded a Golden Globe in January 2015 for Best Film Score for The Theory Of Everything, directed by James Marsh, whilst his music for the film also earned him both Oscar and BAFTA nominations for Best Original Score.  Jóhannsson’s score for Denis Villeneuve’s Sicario was similarly honored with a BAFTA and an Oscar nomination in 2016.  This year will see two major films featuring Jóhann’s original music: Denis Villeneuve’s Arrival starring Amy Adams and Jeremy Renner, and James Marsh’s The Mercy starring Colin Firth and Rachel Weisz.

1. Flight From The City

2. A Song For Europa

4. A Deal With Chaos

6. A Sparrow Alighted Upon Our Shoulder

8. By The Roes, And By The Hinds Of The Field