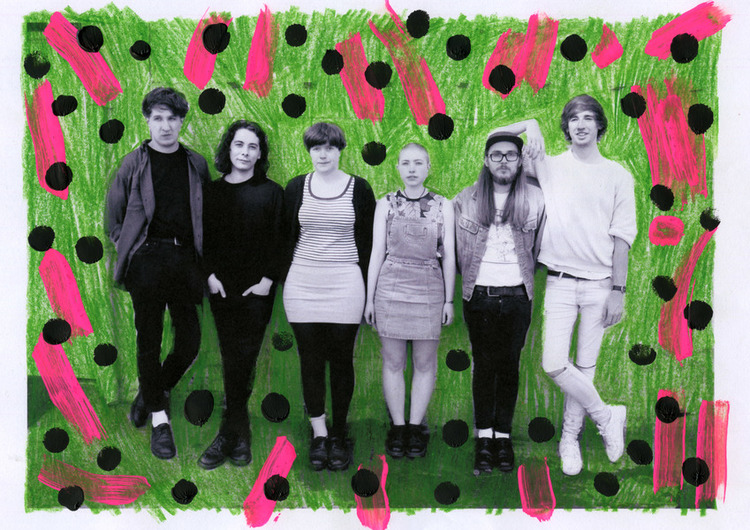 Joanna Gruesome Share Video For Brand New Single “Pretty Fucking Sick (Of It All)”
out now- 1 July, on Fortuna POP!
Now streaming live over at diymag.com, you can check out the new fuzzy video from Joanna Gruesome here: youtu.be/7nw4FwyPJFg

Currently writing their third album in a secure location, Joanna Gruesome have taken a weekend break from a relentless schedule of séances, psychic ceremonies and moonlight rituals to leak two singles from their Peanut Butter period. Songwriter Owen Williamsexplains: “While I was writing Peanut Butter, Saturn transitioned into retrograde and for obvious reasons I ended up losing two songs. We’ve recently managed to unearth them, record them and press them onto a 7″ single.”

“Pretty Fucking Sick (Of It All)” is a pop song about being pursued by intelligence operatives, partly influenced by the group’s recent U.S tour, in which the CIA took a special interest in the band’s movements.

“Occult Bookshop” is a pop song and origin story detailing the first meeting of the group.

Both songs are also about being non binary. Williams explains: “I wanted to write about the confused nature of my own gender identity and being non binary generally. But I also wanted two songs about Occult forces, espionage and using astrological means to strengthen, receive and administer crushes.”

Williams has failed to elaborate further, but a source close to the band has confirmed that listeners may be in danger of accessing “subtle realms of the unconscious” if the record is played on repeat. A rival source has warned of “dissonance, organs, shouting, occult content, pop melodies and ‘hardcore’ punk rock rhythms”.

The record includes a violin performance from Maria Marzaioli and was recorded by Rory Atwell on a boat in London. It features original artwork from Bart De Baets.

“Their tip as one of Britain’s brightest new hopes is more than backed up on this showing.”DIY 4*s

Telekinesis shares video for “Cut The Quick” from forthcoming album, out 22nd February on Merge

The Decline (Skate-Punk / Perth, Australia) Announce UK Tour This Summer & Vinyl Pressing Of ‘Are You Gonna Eat That?’