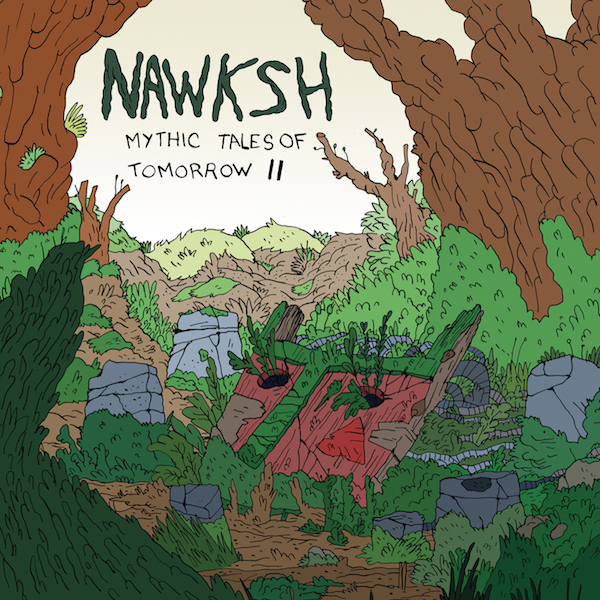 Introducing Nawksh. Hailing from Pakistan’s capital Karachi, Nawksh is video game developer & producer Danial Hyatt – one of the most important and adventurously weird musicians within the growing Karachi underground scene.

Set in a future fantasy world called CERATYL, Nawksh’s debut physical LP, Mythic Tales of Tomorrow II will be released on August 19th via Guruguru Brain – the independent Tokyo label run by Kikagaku Moyo. Nawksh will play his first live show outside Pakistan at the Guruguru Brain-curated stage at this year’s Liverpool International Festival of Psychedelia on September 23rd.

“My music is a deep-dive into the most difficult, darkest parts of my psych” explains Hyatt. “There I attempt to befriend the monsters that lurk, and convince them to follow me back out, knowing they’ll dissolve in the light of the Sun. NAWKSH isn’t an anonymous identity, but is a way to create a degree of separation from myself, in order to be able to perform this “dive”. He’s also my favourite character in a fantasy world in my head.”

That fantasy world, CERATYL, is a place Hyatt keeps private, though he expresses it both musically and through game & comics. One project called “MAAL” was showcased at the Creative Karachi Festival and featured blind clay capsules, which people could buy for 500 Pakistani Rupees each. The only way to get to the contents was to smash them open, and inside was an assortment of goodies, including a download code for one of his EPs called “NUMBSKULL” and a small comic book.

Recorded in his home over the course of two months, Hyatt explains the Mythic Tales of Tomorrow II as: “a labyrinthine series of stories I’ve been collecting and finding ways to connect since I was fifteen”.

“They are also a way for me to understand and express internal processes beyond music. One is coherent and follows its own rules. The other is purely symbolic and poetic. They have this way of feeding back into each other that culminates on a project like this.”

In addition to being his first ever live show outside of Pakistan, Liverpool International Festival of Psychedlia will also see Nawksh meet his Tokyo-based record label, Guruguru Brain for the first time. The label is run by members of psych group Kikagaku Moyo, who recently released their new album ‘House in the Tall Grass’ and will be curating a whole stage at this year’s festival.

Mythic Tales of Tomorrow II is available to pre-order via the Guruguru Brain Bandcamp page: https://gurugurubrain.bandcamp.com/album/mythic-tales-of-tomorrow-ii