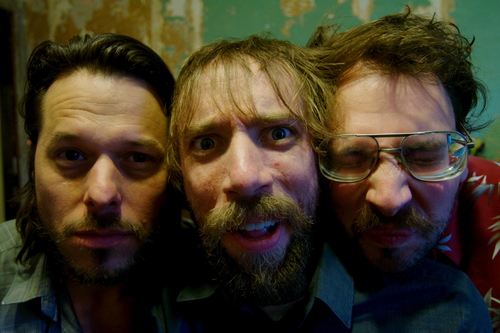 Health&Beauty Premiere Title Track from Wichita Recordings Debut NO SCARE with FLOOD Magazine
Album out August 5, 2016
US Tour Dates Announced
“The Chicago blues-rockers’ new track is soulfully enchanting. Fuzzy but frail, ‘Wartime’ is taken from their new record” The Independent Playlist
“They explore the tricksy time signatures and artful insouciance of Deerhof or Tortoise with aplomb.”:MOJO – 3 Stars
“The Chicago trio make a raggedly glorious sixth.” Uncut: 8/10
On August 5, 2016, the Chicago-based trio Health&Beauty will release theirWichita Recordings debut NO SCARE. Today, the band premiered the album’s title track with FLOOD Magazine who said the band channel “Leonard Cohen-indebted lyrics through a Sonic Youth-indebted sound.”
Recently, the band premiered “Riverside Cemetery” with RedEye, who said “In the song, which boasts breathless intensity due to its recording, harmonies and buzzing guitars bubble up to the surface for some sublimely executed and noisy indie rock.”
Consequence of Sound said the band “deals in quirky time signatures and changes, though they make it perplexingly straightforward, shades of everything from Tortoise to Maps and Atlases working into the instrumental, though some poetic lyrics and buzzing guitars lead the way.”
Health&Beauty is the name under which Brian J Sulpizio has released music since 2003. The current lineup of the group has been playing together since 2012, featuring pianist Ben Boye (a constant collaborator since 2009, who also plays with Will Oldham, Angel Olsen and many others) and drummer Frank Rosaly (a regular collaborator with Peter Brotzmann and many other jazz and experimental music greats). This version of the group along with bassist Anton Hatwich, made up the band on Ryley Walker’s Primrose Green.
NO SCARE is the most euphoric listening experience presented yet in the band’s catalogue, where darkness and light can’t help but complement each other in the short comedy of the human experience.
Health&Beauty recently completed a run of very well received mainland Europe shows with Kevin Morby, and will announce UK shows soon. The band will tour the US this summer. Find a full list of tour dates below.
NO SCARE will be available on LP, CD & Digital. Pre-order the album physically HEREand digitally HERE, with an instant grat of “Wartime” and “Riverside Cemetery.”
Tracklist:
1) Back To The Place
2) Wartime
3) Asunción & Dayanara
4) No Scare
5) Beyond Beyoncé
6) Im Yr Baby (for Aaron Swartz)
7) Riverside Cemetery
Tour Dates:
Aug 9 – Chicago, IL – Constellation w/ Sarah Neufeld & Colin Stetson
Aug 10 – Lafayette, IN – The Spot
Aug 11 – Cincinnati, OH – Listing Loon w/ Social Mechanism
Aug 12 – Columbus, OH – It Looks Like It’s Open w/ Ryan Jewell
Aug 16 – NYC – Trans Pecos w/ Yairms, Outside World, Roulette
Aug 17 – Northampton, MA – Jaume I w/ Family Planning
Aug 18 – Portland, ME – Apohadion Theater w/ Family Planning
Aug 19 – Burlington, VT – Light Club Lamp Shop
Aug 21 – Cleveland, OH – Maple Lanes w/ Nature Camp
Health&Beauty links:
https://twitter.com/wealthandduty
https://www.facebook.com/WealthDuty/
http://healthbeautyband.com/