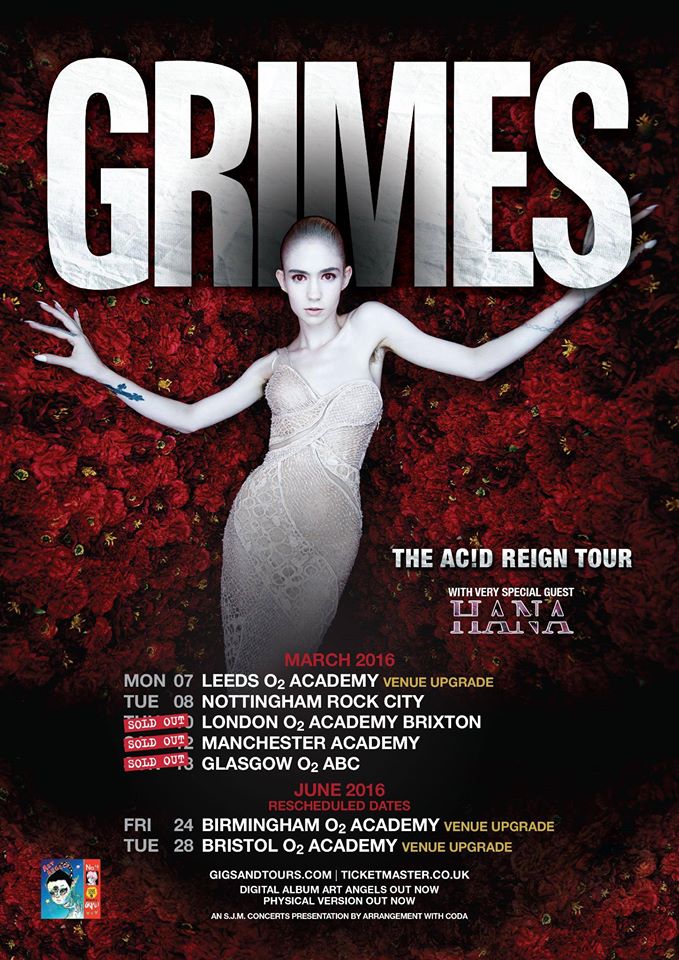 Grimes with support by HANA

Grimes released one of the albums of the year last year with the phenomenal Art Angels so when it was announced that she would be doing a UK tour in March in support of the album, it was highly anticipated by her growing army of fans. The tour was a great success but the last two dates in Birmingham and Bristol were postponed until June to a chorus of disappointment from fans eager to see Grimes perform her hits both old and new in the flesh. Roll on three months and the anticipation to see this live show had reached fever pitch and there is an excited energy in the air as we get to the venue to finally see Grimes in the live environment where she flourishes. Any disappointment at having to wait a bit extra to see the show is dispelled when Grimes takes to the stage to a reaction that can only be described as frenzied.

First up though is Grimes protege HANA who warmed the crowd up with an energetic performance of upbeat and danceable pop that saw the enthusiastic crowd respond in kind to her animated setlist which centred on songs from her new self titled EP. Tracks such as Paradise and Underwater as well as a cover of Here Comes The Rain Again by Eurythmics went down well and she made more than a few new fans tonight and left the stage to a warm reception.

With the now delirious with excited crowd well warmed up, the familiar strains of Art Angels opening instrumental Laughing And Not Being Normal signalled the long awaited arrival of Grimes and that frenzied reaction when she hit the stage was nothing short of phenomenal. Clad in black and white striped trousers, a black top and a headband, she looked every inch the massive star she is rapidly becoming and flanked by two dancers and a returning HANA as a hypewoman, the show got underway.

The set was obviously heavy on Art Angels material but there was a chunk of older material too in a well balanced set that by all accounts had destroyed Glastonbury a couple of days earlier, another sign of just how big Grimes is getting.

As her two dancers created an energetic onstage show throughout, Grimes launched through tracks such as the brilliant Flesh Without Blood and Venus Fly with so much vigour that had the audience in a frenzy and the instrumental Art angels interlude midway through saw an extended dance routine from all four performers onstage to mass delight and the show featured some off kilter moments such as the performance in Russian song Scream and a brief snippet of Ave Maria which only added to the brilliance of Grimes.
Songs from 2012s Visions album such as the sublime Genesis and Oblivion went down extremely well and were highlights for me but it was the Art Angels material that seemed to draw the best reactions and deservedly so with Be A Body and World Princess Part II in particular both standouts and as the gig ended with an extremely spirited version of bonafide art pop smash Kill V Maim, it was obvious that Claire Boucher aka Grimes is very much not only a brilliant performer but also a star already and will only continue in her musical ascendance. A stunning gig and one that was more than worth waiting for.