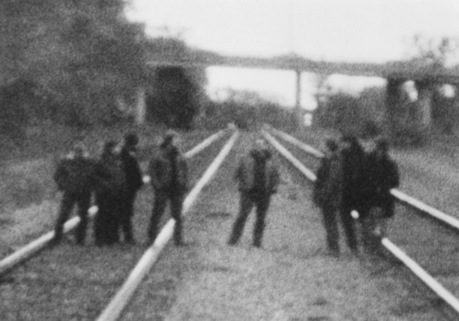 GODSPEED YOU! BLACK EMPEROR TO PERFORM LIVE SOUNDTRACK OF MONUMENTAL AT EDINBURGH INTERNATIONAL FESTIVAL, PLUS MORE TOURING
The eminent Godspeed You! Black Emperor are returning to Europe in August, and it is their first stop in Edinburgh that is particularly intriguing. Beginning on the 8th of August and running for two days at theEdinburgh International Festival, the band will serve as the live soundtrack to a show presented by The Holy Body Tattoo contemporary dance company, titled monumental.
The Holy Body Tattoo have a reputation for choreographing shows that challenge their participants – dancers are pushed to extremes of exhaustion to discover the core nature of performance, and audiences are confronted with bold and intrusive concepts that reflects the modern existence. monumental explores the physical anxiety created by urban culture and the overwhelming human need for intimacy. Nine dancers perch on top of illuminated pedestals that resemble a miniature city. A projected backdrop features gritty urban vision from LA cinematographer William Morrison which is intermittently overlayed with language-based artwork from US conceptual artist Jenny Holzer, evoking the marketing billboards of our modern cities. The dancers make everyday movements extraordinary. With relentless repetition, the banal and ordinary anxieties of life are rigorously intensified to a frantic level. The work revisits the ravages and raptures of life that mark people like sacred emotional tattoos. Their collaboration with Godspeed You! Black Emperor as monumental first manifested in 2005 when the band were on hiatus, and consequently only their recorded music was incorporated at this point – but after a decade, they have united again for a full stage show, so far seen in cities across Canada and Adelaide.
Further detail and tickets can be found at the Edinburgh International Festival site.
WATCH THE FESTIVAL’S PREVIEW FOR THE PERFORMANCE OF MONUMENTAL
There is also the opportunity to see the band in their usual format in the city following on from these special performances, on August 10th. Following on from these three dates in Edinburgh, Godspeed will set off around Europe, revisiting the UK for two dates in London and Bristol, and finishing in Dublin, Ireland. See below for full dates.
GODSPEED YOU! BLACK EMPEROR SUMMER LIVE DATES
08/08/16 – Edinburgh International Festival, performing monumental
09/08/16 – Edinburgh International Festival, performing monumental
10/08/16 – Edinburgh International Festival
12/08/16 – Le Locle, CH – Festival Rock Altitude
13/08/16 – Cologne, DE – Gloria
15/08/16 – Hamburg, DE -Kampagnel
16/08/16 – Tilburg, NL – 013
17/08/16 – Paris, FR – Le Trianon
18/08/16 – London, UK – Coronet
19/08/16 – Bristol, UK – ArcTangentFesival
21/08/16 – Dublin, IE – Vicar Street
In March of last year, GY!BE returned with its first single LP-length release since the group’s earliest days in 1997-99, ‘Asunder, Sweet And Other Distress’, which clocks in at a succinct 40:23, and is arguably the most focused and best-sounding recording of the band’s career. Working with sound engineer Greg Norman (Electrical Audio) at studios in North Carolina and Montreal, GYBE slowly and steadily put the new album together through late 2013 and 2014, emerging with a mighty slab of superlative sonics, shot through with all the band’s inimitable signposts and touchstones: huge unison riffage, savage noise/drone, oscillating overtones, guitar vs. string counterpoint, inexorable crescendos and scorched-earth transitions. With recent appearances described as “a triumph of sound and vision” that “straddled the line between grandiosity and chaos”, GY!BE are in top form as a live unit, so audiences can expect these few 2016 dates to be special performances.
cstrecords.com/gybe
animalsofdistinction.org
www.eif.co.uk/2016/monumental

THE GZA from THE WU-TANG CLAN @ The Jailhouse Wednesday July 18th- Must See Gig!