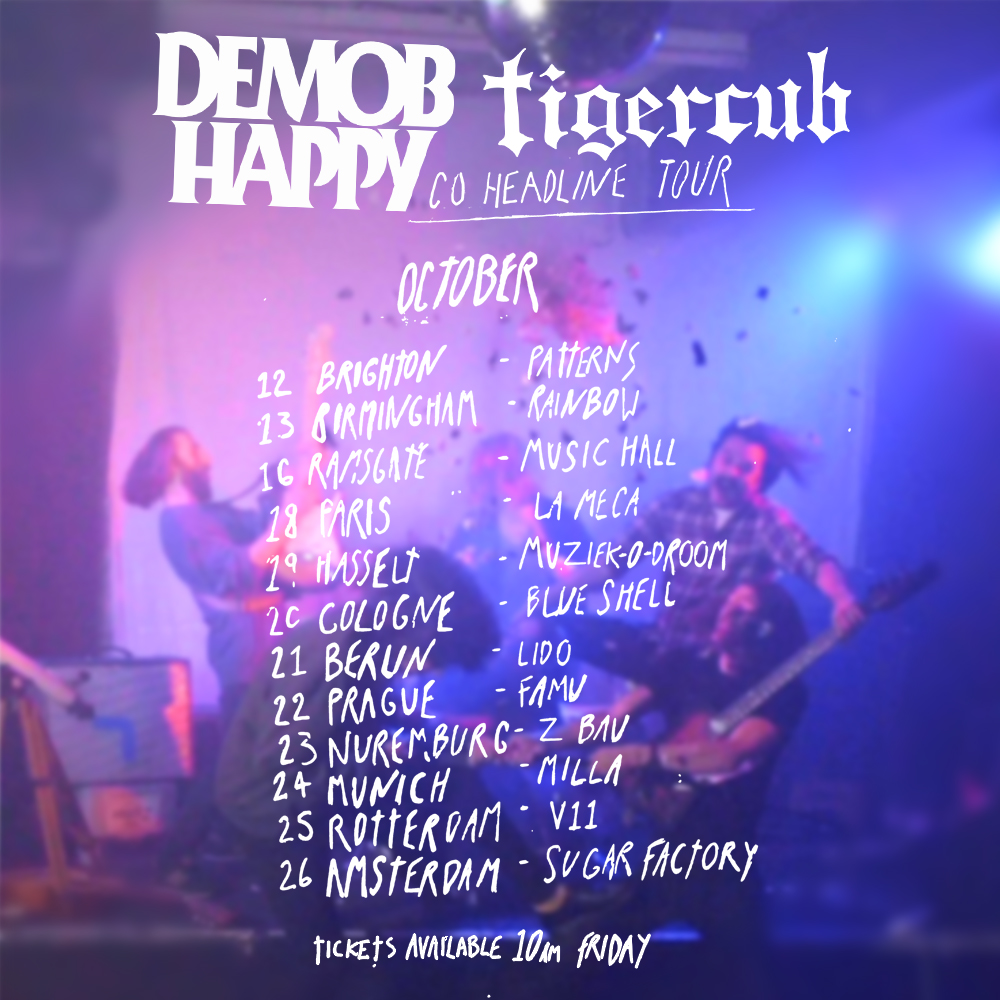 This coming October will see the two definitive pillars of Brighton’s thriving scene lock horns on a venture to bold sonic territories across the continent.Demob Happy will join Tigercub for tour dates across the UK and Europe, beginning at Brighton’s Patterns, careering through Hackney Wonderland and closing in Amsterdam.

Demob Happy frontman Matt Marcantonio explains, “Some twenty thousand years ago, Jamie (Hall, Tigercub) and I were born of the same mother, our childhood unification was pure, our matrimony was blessed, and we towered over the diminutive townspeople. However moments later in 2010, the seas parted and two fleshy boats were birthed; Demob Happy and Tigercub. Our glorious uniform had been split into two disgusting halves. Time passed, and the townsfolk called desperately for their joining, but their prayers were ignored. Until now, for the first time ever, they come together in holy scatrimony to reclaim the places divined unto them; at each other’s sides and fronting two hot-as-fresh-shit rock bands on the tour your heathen grandchildren want bed-time stories about.”

2016 has already seen Demob Happy scorch their way through Texas for packed out gigs at SXSW, out of control basement shows in their own coffee shop-cum-studio HQ, the Nowhere Man Café, at The Great Escape Festival with Dream Wife and Abattoir Blues, riotous Fluffer Pit Parties in North London, not to mention supporting The Joy Formidable on their May UK tour, and The Cribs earlier this month.

Fans of their wild and powerful debut album Dream Soda, dubbed “a frantic, fucked-up mission statement to rival the best of the year” by DIY Magazine, should prepare for a frantic assault on the senses as Demob Happy are currently in the studio preparing a brand new EP due later this year.

Catch Demob Happy live with Tigercub on the dates below. All tickets will be available to purchase from Friday July 1st at 10am.