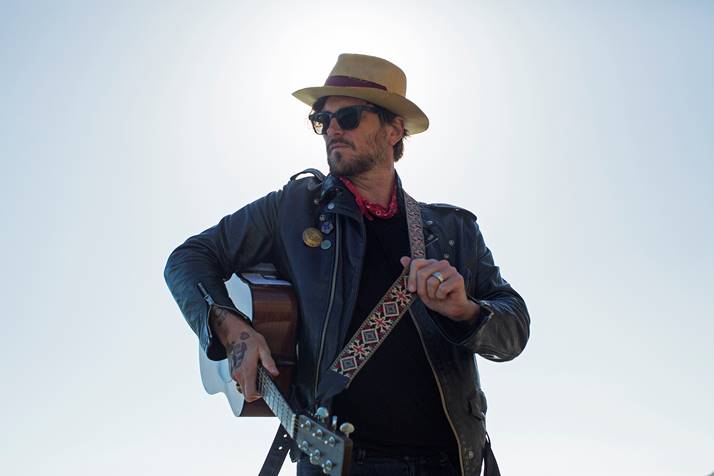 Butch Walker: guitar-slinger, troublemaker, raconteur, producer, Georgia boy. Writer of dozens of songs with hooks that stick in your head; Choruses you want to sing (or shout) along to; teller of authentic stories of exploits and predicaments and romance that are filled with optimism; builder of albums with no boundaries – rock, pop, Americana, singer-songwriter … or, as Butch tells it, “I think it’s all just rock & roll.”

Stay Gold is Butch’s 8th album. The last one, 2015’s Ryan Adams’ produced Afraid Of Ghosts, was a cathartic record that dealt with a devastating personal experience, the passing of his father. This one’s a celebration. In Butch’s words, “After coming out of the AOG album cycle and tour where, at the risk of sounding ridiculous, I spent a lot of time on stage bawling my eyes out, I felt a very calm sense of peace. Like I’d done what I needed to do to get it outta my system. Every song that came after that was almost a nostalgic, celebratory … for lack of a better word – “jam.” And the songs just kept coming to me (snaps fingers three times), which was good cos that’s not always the case!”

You’ll find that the stories on Stay Gold are very well fleshed out, something Butch credits to “growing up on some of those dudes – Elton John and the (Bernie) Taupin lyrics, Springsteen and Joel. I love that stuff. I had a buddy, Matt Marston, who was actually dating my sister back in the early 90s. He was a songwriter and ended up being a pretty big unsung influence on me because – well, there’s no escaping the fact that I had a hair metal band in the late 80s / early 90s and it was a lot of fun but it wasn’t always very broad, lyrically. I certainly listened to people whose words blew my mind, like Elvis Costello, Tom Waits and others, but I couldn’t cop it. I didn’t even understand how to go about it. And this guy, Matt, opened my mind. He could paint these vivid pictures and stories … so, I asked him how he did it. He told me, ‘I just kind of pay attention to my surroundings, sitting on the subway or the bus and I see a guy over in the corner reading the paper, he’s maybe like fifty-five-years-old, sixty-years-old, and I’m wondering what his story is.’ For some reason, the light bulb went off in my head. I gotta give it to that guy, Matt, for helping me figure it out.” That long ago ’eureka moment’ still informs Butch’s writing and the material on Stay Gold is clearly his best to date. When asked if the stories are real or imagined, he replies, “All the songs are half true.”

The album kicks off with the title track, a straight-ahead rocker loaded with swagger, the lyrics calling out native GA locales. It’s a tale Butch says is “about being from a shit-dead-end-town and not having a glimmer of hope. I wanted this record to somehow spin all of those negative stories into a positive light.” And that, it does. Butch’s writerly eye for detail is apparent in one of Stay Gold’s standout tracks, “Wilder In The Heart.” Describing an airport meeting with a girlfriend, Butch sings, “Baby blue suitcase from your grandad / New tattoo above your bra.” Then there’s a disarming cut-right-to-it honesty when he asks, “Did you come back to say you’re sorry / Or are you just scared of being alone.” Interesting to note – ‘Wilder’ was the first song written and recorded for the album. The ballad, “Descending” is a unique one in Butch’s canon. A beautiful, decidedly tender duet / co-write with country singer, Ashley Monroe. “Irish Exit” provides a cool stylistic shift with a Celtic sound on a lively and hilarious tune about ducking out of a party to get away from the “selfie selves.” There’s a tight, dramatic segue into the down-tempo ballad “Can We Just Not Talk About Last Night” that indirectly makes us focus on the provocative topic – things getting physical with a friend and the awkwardness of the morning after. The rasp in Butch’s voice here adds so much, you can feel him digging deep to capture the emotion. “Spark: Lost” begins the album’s wrap up with a monster chorus and a gorgeous guitar solo. “Record Store” is a nostalgic heartfelt look at diminishing record store culture, with a subplot about having a thing for a “badass rock chick that worked the counter.” Written specifically as a closing song on the very last day of recording, Butch explains the basic track “was done live – acoustic and vocal. And it kinda got to me as I was singing it. Which sounds cheesy to say, but it hit home. A sore subject for many of us. The record stores I hung out at really shaped me as a musician, shaped me as a person … and I wish it was as big a thing in shaping kids today.”

That sort of compassion and the freedom we sense from a Butch Walker album are a big part of what draws us in. He makes records exactly the way he wants to, never does the same kind twice. It’s a freedom Butch has earned, further honing his craft through outside production work and writing for others. The wide range of artists he’s collaborated with is dizzying and remarkable – everyone from cutting edge musicians like Frank Turner, Brian Fallon (Gaslight Anthem), Shovels & Rope, Puffy AmiYumi and The Von Bondies to mainstream blockbusters like Taylor Swift, Harry Connick Jr., Katy Perry and Pink. “I love helping other people make their music. It feels good to get outside of my own box.”

Butch Walker is an authentic, modern-day guitar hero. A humble man who openly shares credit for the power of Stay Gold with ace players like keyboardist Roger Manning Jr. (Jellyfish, Beck, AIR), drummer Mark Stepro (Ben Kweller, Keith Urban, Panic! At The Disco) and Suzanne Santos (HoneyHoney) on backing vocals and violin. Before Butch darts back into the studio, he grins and says, “It’s been fun to listen to (Stay Gold) in the car. I’d be lying if I said I didn’t play my records after I do ‘em. And it’s a blast to drive down the PCH and listen. I wanted to make that kind of record.”