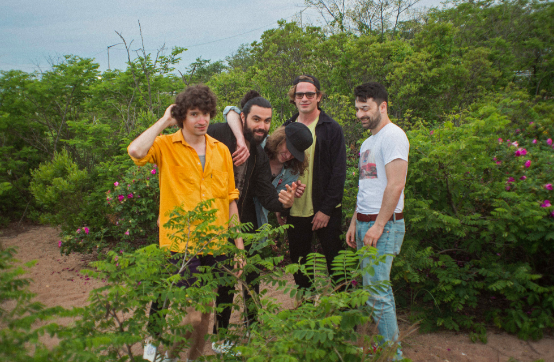 “Bueno Summer” continues and things are heating up. The band are excited to share “Blown Out,” the third single from the Staten Island quintet’s highly anticipated sophomore album, Illuminate Your Room. Due out August 19th via Exploding In Soundand Babe City Records, “Blown Out” is a dreamy track, showing the sweeping nature of Bueno at their best, while Luke Chiaruttini sings of broken memories, overstimulation, and reworked nostalgia. The song slinks about on duel guitar harmonies and crooning vocals with a breezy charm, it’s a slacker pop anthem of repressed thoughts amid “the wasteland” of Chiaruttini’s mind.

Chiaruttini says “Blown Out” is about “the pain of nostalgia and what comes from a sensory overload when a too-strong sun or decrepit American infrastructure triggers oppressive memories to come flooding back. The memories don’t come back intact but as disjointed glimpses of the past that we reconstruct as narrative later.”

Premiering on AdHoc, they offered their own interpretation of the song:

“Bueno delivers a personal take on a familiar rock narrative. Waking up to a world they don’t understand or particularly like, Chiaruttini’s narrator confronts a vapid and unforgiving wasteland from the perspective of an outsider.

“Chiaruttini’s ominous and semi-spoken vocals, when paired with the doomful drumming and distorted guitar chords, result in a cautionary track that both succumbs to and warns of what happens if you keep your eyes on the cards. Or even worse, what can happen when you look away.” – Consequence of Sound