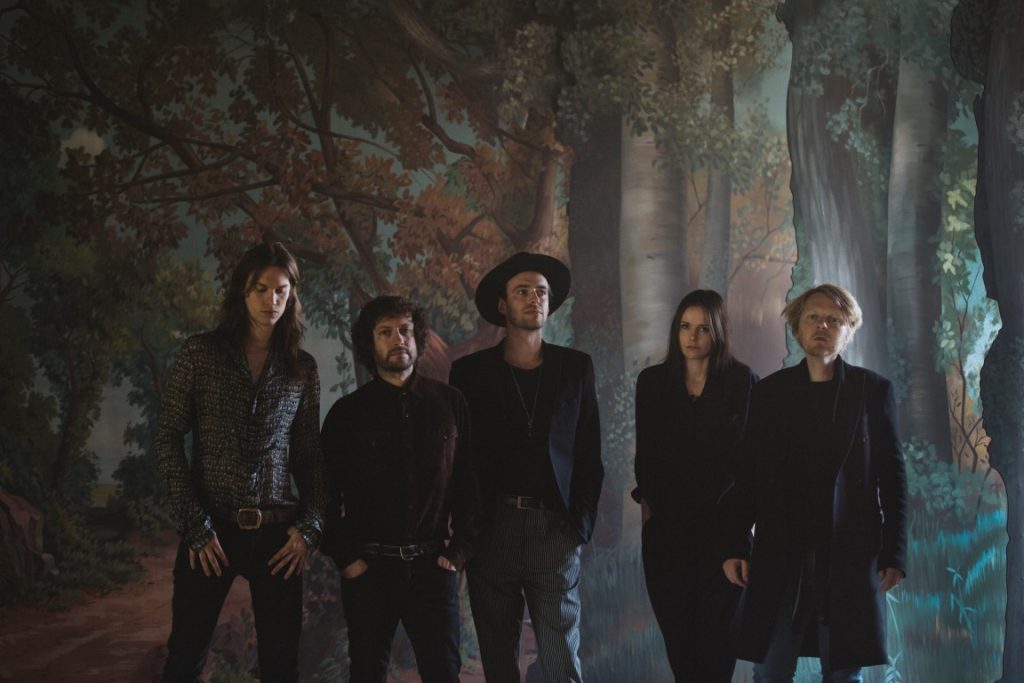 New Music of the Day

OUT AUGUST 26 ON NETTWERK RECORDS

ALBUM CO-PRODUCED BY EL-P (FROM RUN THE JEWELS), ATOM GREENSPAN

AND FINN ANDREWS (OF THE VEILS)

The Veils new single, ‘Low Lays The Devil’ has received its world premiere this week, getting its debut on Zane Lowe’s Beats 1 show.

“It’s a song about The Evil One, Big King Below, Beelzebub, the fallen angel, Mephistopheles, Mr. Moonshine,” says lead singer Finn Andrews. “It’s got a beat as big as a house and it’s coming for you in your sleep.”

It’s the latest track taken from the band’s anticipated 5th album ‘Total Depravity’, out August 26th on Nettwerk. Produced by Adam ‘Atom’ Greenspan (Nick Cave & The Bad Seeds, Arcade Fire, Yeah Yeah Yeahs, Band Of Skulls) ‘Low Lays The Devil’ is an impressive return to form for the acclaimed 5-piece, with NME making it their ‘New Music of the Day’ on release and comparing it toThe Black Keys, “With a vocal that fits somewhere in between Kentucky rockers Cage The Elephant and Canada’s psych-folk group Timber Timbre”  (NME).

This is the second single to be released from the album, following the previous track, ‘Axolotl’ whose video was recently premiered by Pitchfork here.

‘Total Depravity’ reunites the band with the aforementioned producer Adam ‘Atom’ Greenspan and also sees co-production fromRun The Jewel’s El-P.  Andrews and El-P met up in various locations to collaborate together over a two-year period, with ‘Total Depravity’ recorded at Estúdios Sá da Bandeira in Portugal, Konk Studios in London, Casa Lynch in Los Angeles and El-P’s studio in Upstate New York.

“Over a period of roughly 2 years an album began to take shape,” says Finn. “There is a large cast of characters on this record. L. Ron Hubbard, Axolotls of course, kind natured crocodiles, a psychotic truck driver, The Pope and Ingrid Bergman all get a look in. The songs are all stories of various kinds; some experienced firsthand, others fabricated for my own amusement. It’s the first time I’ve ever written songs using mutilated loops and sounds as a starting point, though some of the songs also began on piano and were messed with later.”

Last month, Showtime shared the full cast to David Lynch’s reboot of his groundbreaking 1990 series Twin Peaks. Andrews is one of a handful of musicians set to appear in the upcoming revival; alongside other named artists like Eddie Vedder, Trent Reznor, Sharon Van Etten and Sky Ferreira.

5. Swimming with the Crocodiles

Singer Finn Andrews and bass player Sophia Burn first met when they were 12 years old at high school in New Zealand.  Along with Henning Dietz (drums), Dan Raishbrook (guitar) and Uberto Rapisardi (keys)  The Veils have released three records on Rough Trade Records: The Runaway Found (2004), Nux Vomica (2006), and Sun Gangs (2009). The Troubles of the Brain EP (2011) and Time Stays, We Go (2014) followed later on the band’s own label Pitch Beast Records.

“Gloriously sad-eyed rock that preaches to the perverted… The Veils have their own kind of elegant, seductive power.” – The Guardian (UK)