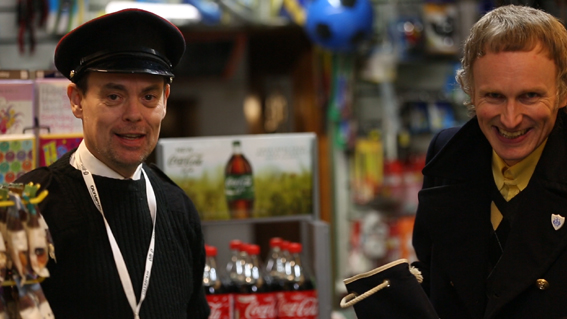 Last year Micko Westmoreland released his latest album, Yours Etc Abc, an album full of intricate songs that play on good old fashioned hooks, coupled with a well-honed sense of musical experimentation.  The album featured guests; Mark ‘Bedders’ Bedford (Madness), Mickey Gallagher (The Animals/The Blockheads) and Terry Edwards (PJ Harvey/Franz Ferdinand/Gallon Drunk).  Louder Than War described it as “an album for lovers of light music which hides a darker side to it.  Poetry in motion with perfect tunes. Obsessive and compulsive Art-Pop”

Micko has now released a video for the single, “Schmescos” taken from the album, starring comedy legend Kevin Eldon. The video premiered on Louder Than War.

Watch and share the video for “Schmescos” HERE
Kevin, whose list of credits includes The Day Today, Brasseye, Alan Partridge, Big Train, Jam/Bluejam, Fist of Fun, Four Lions, Smack The Pony, Black Books, Green Wing, The IT Crowd and his own BBC2 show It’s Kevin, filmed his role as a supermarket security guard shortly after shooting for the new season of Game of Thrones.”Schmescos” deals with the adrenaline rush of shoplifting among a backdrop of corporate irresponsibility and bland day-to-day existence.  With its bold chorus of “All I want to do is rob from Tescos” it makes no bones about its provocative message, although in the interests of fairness Micko is keen to point out that other supermarkets are also available.

Micko persuaded Kevin to appear in the video after they formed charity band, The Spammed.  Together with punk legend Rat Scabies, formerly of The Damned, Horace Panter of The Specials and Neil Innes of Rutles/Monty Python fame, they regularly lay down cover versions of songs by The Clash, Beatles and others to raise cash for the Teenage Cancer Trust.

“What I particularly enjoyed about making this video,” says Kevin, “was standing outside a supermarket dressed as a security guard, unshaven and smelling, probably, quite strongly of Merlot, and then having a passing T.V. producer I’ve worked with before clock me and visibly internally struggle with the possibility that things might not be going quite so well for me professionally as they could be.”

The ‘Schmescos’ video appears in the run up to the release of a full length digital album of re-workings taken both from Micko’s two solo albums and the two more electronic-slanted LPs he previously released under the name, The Bowling Green.  Released on August 12, the ‘Remixes’ project features a never-heard-before version of “Tigons & Liger” by Si Begg and mixes by Luke Vibert, Mike Paradinas, T Power and Ian O’Brien which are being made available in digital form for the first time.  The release of ‘Remixes’ also coincides with the release of the two Bowling Green albums ‘Fabrications’ and ‘One Pound Note’ in digital form.