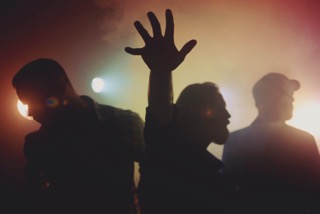 Dream the Electric Sleep combine 70’s AOR and 80’s Darkwave, with a spacey, heavy post-rock intensity. Influenced by Led Zeppelin, The Beatles, Neurosis, Peter Gabriel, Pink Floyd, Tears for Fears, Soundgarden, and The Who, Dream the Electric Sleep have spent the last eight years crafting an expansive, eclectic sound.
The band was formed in Lexington, KY by Matt Page (vocals/guitar), Joey Waters (drums), and Chris Tackett (bass) in 2009.  After two self-produced, independent releases, “Lost and Gone Forever” (2011) and “Heretics”(2014), Dream the Electric Sleep is preparing to release its third album, “Beneath the Dark Wide Sky,” which marks a clear shift in the band’s songwriting style and sonic quality. ‘Let The Flood Light In’ is the first taster of what fans can expect from the album. Watch the new video here –
“We decided we needed help realizing the vision we had for the new album,” says guitarist and vocalist Matt Page. “The songs were different enough from our earlier material that we felt they needed a new treatment and a fresh set of ears to help pull out the strengths and tighten up the ambiguities of each song. We contacted several producers we wanted to work with, and sent them the demos. We were thrilled to learn Nick Raskulinecz was interested in working with us. We went to Nashville to meet him and jam at Rock Falcon Studio and had a blast. There was a real chemistry between all of us and we knew we’d found our guy.”
Raskulinecz, who has produced multiple Grammy winning bands such as Foo Fighters, Mastodon, Rush, and Alice in Chains, helped shape “Beneath the Dark Wide Sky” with his commitment to crafting an emotive sound palette and capturing high energy performances.
“Beneath The Dark Wide Sky” will be released on July 22nd, 2016.
Limited 2LP Vinyl, CD Digipacks and T-shirt Bundles can be pre-ordered here:
Europe: http://mutiny-records.com/shop/
https://www.facebook.com/DTESBAND
http://www.dreamtheelectricsleep.com