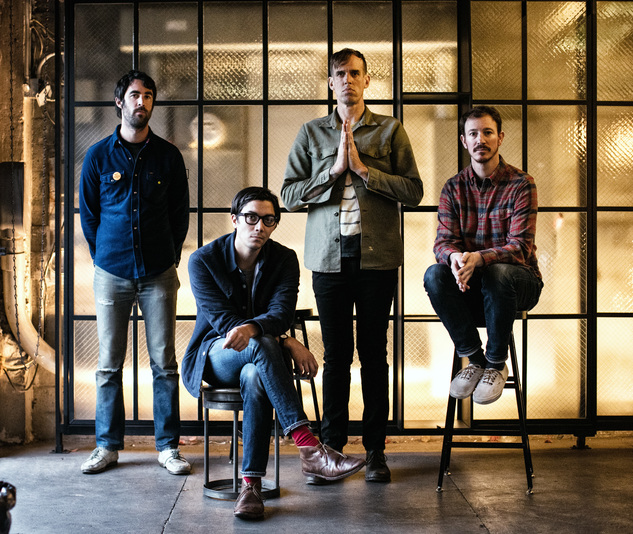 Young Moon
Announces new album Colt
Due out on Western Vinyl on 3 June
Trevor Montgomery is a craftsman. By day he’s a skilled tile setter, a job taxing to both the mind and body. By night he’s an equally meticulous and hard working musician, coaxing just the right tones out of his vintage drum machines and synths to carry his tales of love and redemption. As a tile setter and as a musician, his job is the same: assembling things of beauty to fill empty spaces. Gifted with a sombre baritone, Montgomery returns with a new album under his Young Moonmoniker entitled Colt, due for release on Western Vinyl on 3 June.
The video for “Fell On My Face” was premiered at Consequence of Sound who said: ““Fell on My Face” is a mournful tune filled with listing guitar and dragging drums, but there’s a constant air of hope just over head. It beats with that pained acceptance one eventually reaches after a painful separation, when you grieve the loss but find solace in the memory of how good love can be.”
Clash premiered the title track from the album Colt this week calling it; “A mature, open, emotive, and breezy affair, with slight tinges of country beneath its austere indie rock.”

Having been in bands such as San Francisco post-rockers Tarentel and solo under the monikerLazarus (Temporary Residence), in 2012 Montgomery released Navigated Like the Swan, his first album as Young Moon. According to The Wall Street Journal; “It engulfs the listener—and sometimes even the narrator…”, while Consequence of Sound called it “…powerful and heartfelt…”.

Soon after its release, the relationship that inspired those songs unraveled, leaving Montgomery at an all-time low, living on a houseboat out of necessity, and unable to write songs, or even play guitar. “That part of me was broken. My life was pretty broken as well,” says Montgomery.  Fortunately he realized he needed a radical change to rebuild his mind, body, and spirit.  He turned to devotional yoga to facilitate that change.  As he explains, “I chanted, stretched, sweated, juiced, and ate salads…transformed my body first and foremost.  I kept practicing yoga 5-7 days a week, and I started my daily meditation practice. It was at the two-year point that I was ready to start playing music again. I’m sure there are other songwriters and artists out there that can relate to not being able to work due to just being too broken, too sad. I don’t blame my relationship failing at all, that was just the spark that made me realize that I was really fucked up on a ton of levels.”

Though he eased back into the habit of playing music on a daily basis, something was still missing.  Drummer Syam Zapalowski was a Young Moon fan, and started pursuing Montgomery about playing live shows with him.  Zapalowski‘s persistence and encouragement led Young Moon to expand to include Montgomery’s longtime collaborator Danny Grody on guitars and synths, and Jeff Moller on bass.  “It was a natural progression for Young Moon. I needed to have more dynamics and volume to tell the stories the way they were laying out in my head,” saysMontgomery.  Inspired by the newfound potential of a full band, and revitalized by his yogic discipline, the songs that make up the new album Colt started coming together.

Understandably, many of the ideas about love and compassion that he absorbed though yoga and meditation show up throughout the album.  Though most of the songs recount Montgomery’s experiences of self-acceptance and transformation, album standout “Fell On My Face” takes the listener back to the bleak days in his life, when he first realized he needed to make a change.  Even when he’s shining a light on the dark and broken parts of his past, Colt feels redemptive, inspiring, and full of hope.

“…is a dark work about lost love and dissociation. It engulfs the listener—and sometimes even the narrator…” – Wall Street Journal

“powerful and heartfelt, somewhere between Nick Cave and Leonard Cohen.” – Consequence of Sound

“just the right mix of electronic wizardry and human expression.” – Consequence of Sound

“…patient, insistent record…in his quiet way he still gets your attention.”  – Pop Matters