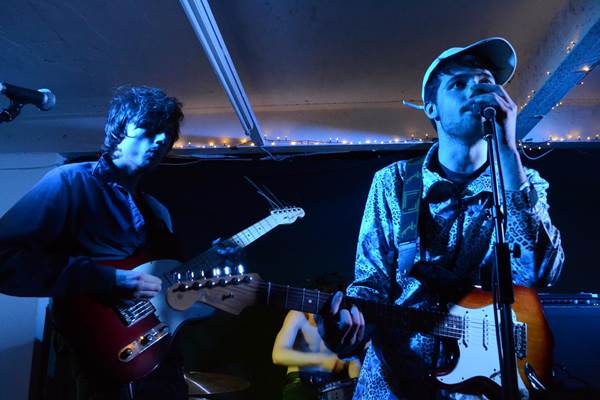 “The band’s blazing, buoyant energy is matched to a love of classic British songwriting.”
Clash

“A raucous, revivalist sound”
The 405

Celebrated Cardiff indie-rockers Tibet, renowned for their raucous brand of pumped up melodic pop, today release brand new double EP Above The Moon on limited edition vinyl, via Alcopop! and the band’s very own label Rat Trap Recordings. After garnering support from the likes of Annie Mac, Huw Stephens, and Nick Grimshaw, the band are also releasing a brand new single, ‘I’ll Put You In My Pocket’.

Shimmering with the kind of spangly melodies than ensure they’ll be spinning round your head for weeks, Tibet’s music nonetheless carries a distinctive gritty attitude – with a raw adrenalin-soaked edge to their anthemic rabble-rousing style, for fans of Cage The Elephant and The Coral.

Inspired by local venue The Moon, where the band cut their teeth, Above The Moon will be packaged with a run of brand new t–shirts, exclusively available with the record.

This week Tibet will also be debuting their new single ‘I’ll Put You In My Pocket’, a live favourite recorded with James Kenosha producer of cult-hit albums by Dinosaur Pile Up and Pulled Apart By Horses.

Tibet recently recorded a Maida Vale session for Huw Stephens on Radio 1, which will air ahead of the band’s appearance at The Great Escape in May, and the band will be touring from March 2016 to September 2016, with appearances at Club NME, Latitude, Reading and Leeds, Bushstock, X Festival, Isle Of Wight and Truck.

Rat Trap Recordings started life as a club night and exhibition that pulled music and artistic talent from Cardiff together under one roof, in unusual venues. Tibet frontman Joel Hurst says Rat Trap was formed from a wish to make their local shows more of an experience. “There is so much great talent in Cardiff and it sometimes feels like everyone’s fighting against each other to get to the top, which is a crazy idea, especially for a music and art scene that is still so underground,” he says. “We came to the conclusion that we become a much bigger entity when we come together.”

Speaking about the record, Joel Hurst said: “We’re excited to team up with Alcopop! on this release – they are doing exciting things with UK artists.”

Jack at Alcopop! added: “We’re really pleased to be working with Tibet, who are one of the freshest-sounding bands around at the moment – and we’re delighted to be bringing them on board at Alcopop! It’s rare you’re so immediately blown away by an EP as we were with their debut, so it feels right we’re coming together now. Also – the Dalai Lama seems like a great guy, and I think he’d approve of a band with this name, so we’re happy about that.”

Above The Moon track listing:

I’ll Put You In My Pocket

See You Out Tonight

So Low You Forgot How To Lose