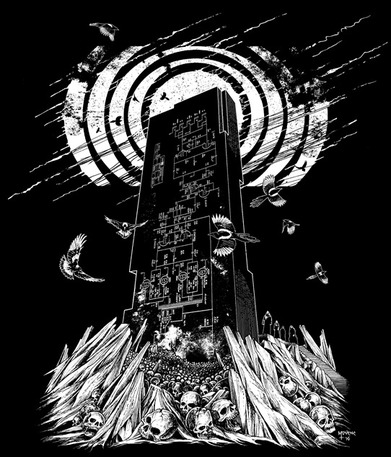 SUNN O))) shall be returning in August and September for a series of shows across Scandinavia and central Europe, including four shows in Germany and taking in some incredible and unique settings along the way.
Amidst their 11 day tour, SUNN O))) shall perform in the Labirinto Della Masone, an outdoor maze of impressive and foreboding nature (and the world’s largest), and they have also been invited to perform at the Ruhrtriennale Festival of Arts under the artistic direction of the Dutch director Johan Simons. They will perform in the Turbinenhalle at an old power plant called Jahrhunderthalle Bochum. The theme of the programme is “Seid umschlungen” (be embraced) – a gesture of social, political and geographical embracement.
The full listings are below, including imminent forthcoming North American tour dates, and European shows on the horizon, which include the classic Paradiso in Amsterdam – a perennial O))) favourite, the unique Vooruit in Ghent, culminating with a performance at this year’s Hellfest, where fans can see SUNN O))), Earth, Melvins and Magma all in one stage in one day. Hellfest 2016 is headlined by our gods Black Sabbath.
SUNN O))) LIVE DATES:
NORTH AMERICAN TOUR DATES:
06/06/2016 The Ready Room – St. Louis, MO
07/06/2016 Thalia Hall – Chicago, IL
08/06/2016 Grog Shop – Cleveland, OH
09/06/2016 El Club – Detroit, MI
10/06/2016 Hearn Generating Station – Toronto, ON @ Unsound Toronto at Luminato Festival
11/06/2016 Theatre Fairmount – Montreal, QC @ Suoni Per Il Popolo Festival
INCOMING EUROPEAN SHOWS:
14/06/2016 – NL, Paradiso – Amsterdam
15/06/2016 – BE, Vooruit – Ghent
17/06/2016 – FR, Hellfest – Clisson
NEWLY ANNOUNCED SUMMER SHOWS: