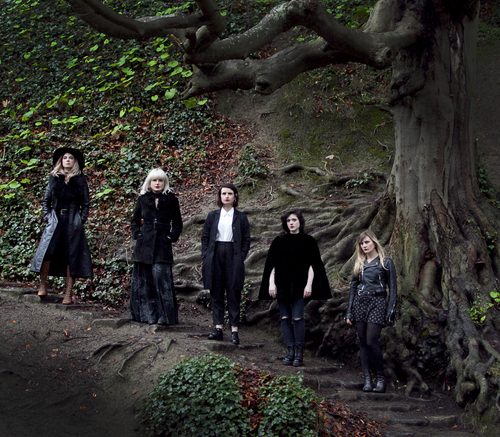 New album Age of Indignation out now on Fortuna POP!

Following the release of their second album Age of Indignation via Fortuna POP! last month, Dublin quintet September Girls hit the road across the UK including a headline date at London’s Islington Academy on 19th May. They will be joined by Telegram, who will co-headline on four shows; Liverpool, Glasgow, Birmingham and Oxford.

The ten tracks on Age of Indignation bristle with atmospheric textures and dark-hearted noise, tackling complex subject matter such as feminism, religion and life in Ireland at this point in history along the way.

Formed in Dublin in 2011 and named after the Big Star song (by way of The Bangles), September Girls share songwriting and vocal duties amongst each of the band members. They comprise Paula Cullen on bass, Caoimhe Derwin and Jessie Ward O’Sullivan on guitar, Lauren Kerchner on keys and drummer Sarah Grimes.

Age of Indignation follows September Girls’ debut Cursing the Sea (2014), an album that enjoyed considerable critical acclaim from the likes of The Guardian, The Fly, NME, The Sunday Times, The Observer and Uncut amongst others, with Time Magazine naming them as one of the 11 best new bands in the world. Since then the band have played slots at SXSW and CMJ as well as UK festivals such as Beacons, Great Escape, and Liverpool Psych Fest, not to mention a mobbed show in Berwick Street for Record Store Day. In late 2014 the band released a four-track EP Veneer, building on the foundations of Cursing the Sea and anticipating Age of Indignation, as they headed down a darker path.

As opposed to their debut album, which was recorded mainly at home, Age of Indignation was recorded at Dublin’s Orphan Studios, lending it a more assured, powerful sound. Brutally honest and brilliantly realised, Age of Indignation is a masterful album from a band confident enough to leave their influences behind. Still retaining the swirling psychedelia and intensity of their debut, this time round they are tighter and more controlled, whilst underneath something much darker and urgent is at work. This is music at its most riveting and atmospheric.

“Imagine Savages if they’d spent their formative years listening to goth bands instead of post-punk… makes for a thrilling sound.” Q

“Wreathed in gothic guitar riffs, thunderous tom-toms and a wall of feedback.” Uncut

“This is shard-filled, reverb-drenched noise-pop at its most riveting and atmospheric.” The Sunday Times

“Their songs are dreamy and poppy but have an understated gothic essence.”  The Guardian