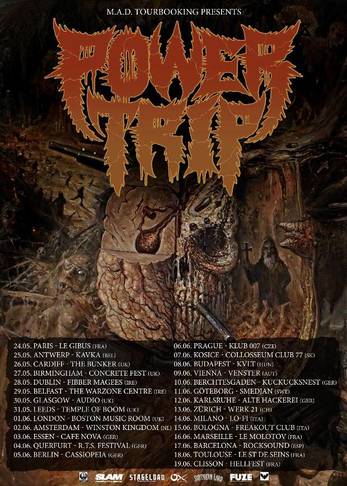 POWER TRIP TEXAN CROSSOVER TITANS TOURING EUROPE THIS MONTH
It’s a long way to the top if you want to thrash, but Power Trip are very much on their way. Since the release of their debut LP, Manifest Decimation, the band have been playing and touring ceaselessly with everyone from international names like Lamb of God and Anthrax, right through a comprehensive list of the best operating in the hardcore, metal and punk underground. With their trademark reverb-drenched old school attack that brings to mind Cro-Mags and early Sepultura amongst others, Power Trip remain one of the most convincing and gratifying bands to listen to and experience, and their new record, Nightmare Logic (due out on Southern Lord this year) is set to cement that legacy with more of their savage formula to get heads banging and bodies flying.
Before that record is released, they will be touring for the best part of a month across Europe, for the first time since their trip over here with Bane in 2013. These dates are highly anticipated and kick off in just under two weeks – the full list is as follows:
POWER TRIP TOUR DATES:
24/05/16 – Paris, FR, Le Gibus
25/05/16 – Antwerp, BE, Kavka
26/05/16 – Cardiff, UK, The Bunker
27/05/16 – Birmingham, UK, Concrete Fest
28/05/16 – Dublin, IE, Fibber Magees
29/05/16 – Belfast, UK, Warzone Centre
30/05/16 – Glasgow, UK, Audio
31/05/16 – Leeds, UK, Temple Of Boom
01/06/16 – London, UK, Boston Music Rooms
02/06/16 – Netherlands, NE, Winston Kingdom

04/06/16 – Querfurt, DE, RTS Festival
05/06/16 – Berlin, DE, Cassiopiea
06/06/16 – Prague, CZ, Klub 007
07/06/16 – Kosice, SK, Colloseum Club 77
08/06/16 – Budapest, HU, Kvlt
09/06/16 – Vienna, AT, Venster
10/06/16 – Berchtesgaden, DE, Kuckucksnest
11/06/16 – Goteborg, SE, Smejdan
12/06/16 – Karlsruhe, DE, Alte Hackerei
13/06/16 – Zurich, CH, Werk 21
14/06/16 – Milano, IT, Lo-Fi
15/06/16 – Bologna, IT, Freakout Club
16/06/16 – Marseille, FR, Le Molotov
17/06/16 – Barcelona, ES, Rocksound
18/06/16 – Toulouse, FR, Le St De Seins
19/06/16 – Clisson, FR, Hellfest
Watch live footage of some of their many sets from hate5six to get an idea of what to expect, and listen to Manifest Decimation at their bandcamp. Magic Bullet Records are presenting a split release between Integrity and Power Trip that shall be released in June, find out more via Earsplit.
Think immense slamming riffs careening around your skull in a whirlwind of massive ringing snare hits and dripping hot lead breaks. The old school production won’t be to everyone’s taste, but it makes a change from the desert dry mixes so in favour today, and it suits the bands’s hell-for-leather approach to a tee, vocalist Riley spitting his lyrics with a venom to rival Dwid from Integrity. One for fans of Wargasm, Leeway and, er, moshing like its 1988.” – TERRORIZER
“This is, quite possibly, the best crossover thrash revival album that’s been made.” – COLLECTIVE ZINE
“Sounding like some sort of terrifying Cold War army marching execrably onwards to the sound of Exodus covering Nuclear Assault, Power Trip are the crossover thrash band you’ve been waiting for. They have the apocalyptic subject matter. They have the furious, hyper-sonic, palm-muted riffs. They have the blast beats (and even the odd d-beat). And thanks to a pre-Reign In Blood attitude to production (i.e.wash everything in such colossal amounts of reverb that it sounds like they’re playing at the bottom of a pit, under a tank factory) the sound of tracks like ‘Conditioned To Death’, with its Hanneman-esque wailing solo, is absolutely fucking massive.” –QUIETUS
“Unlike other contemporary thrash bands, Power Trip create a legitimately violent atmosphere, and don’t go around wearing sleeveless jean jackets with the front of their baseball caps turned up. They sound less like they’re here to party, and more like they want to kick your ass.” –PITCHFORK
www.facebook.com/powertripTX
www.southernlord.com