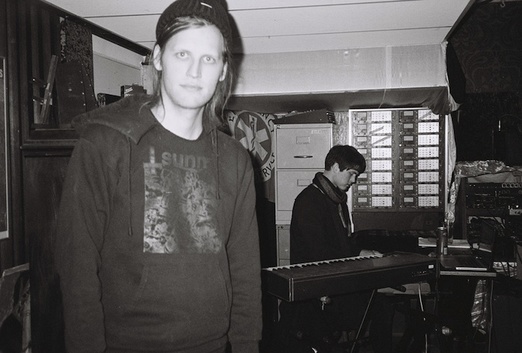 OKKULTOKRATI: NORWEGIAN QUINTET CURRENTLY CONSTRUCTING THEIR SOUTHERN LORD DEBUT
Norwegian mavericks Okkultokrati are currently immersed in the completion of their fourth full-length album, and first for Southern Lord, this week divulging new details on the impending album.
Okkultokrati has been occupying Malabar Studios, in Oslo, working closely with engineer Emil Nikolaisenof Serena-Maneesh, who also recorded their Snakereigns LP, recording around the clock, capturing the tracks as they would on stage, void of click tracks or tutoring tactics. The band also announces a new member, Feffe Severin joins the lineup on synth, as they add new elements of otherworldliness to their already diverse sound. Severin becomes the fifth member of Okkultokrati, joining vocalist Henning, guitarist Erik Svarte, bassist Boris, and drummer Lars.
Upon hearing the current mixes, Southern Lord owner Greg Anderson said of the album, “Fucked up in all the right places! Super original and I can say that I’ve definitely never heard anything like this! Visions of Bauhaus and Dark Throne listening to Joy Division albums by torchlight in the dark forests of Oslo.”
Southern Lord shall release the as-yet-unnamed new LP this Autumn 2016; stand by for additional details to be issued shortly. Meanwhile, the label is currently preparing for the reissues for two of Okkutokrati’s prior LPs — their 2012 – Snakereigns and 2014 – released Night Jerks LPs – which were originally released via Norwegian label Fysisk Format. These two albums will see re-release on LP, and both combined on one CD this Friday, May 6th; preorders are available via the Southern Lord store.
European tour dates for the year are imminent, and the band is planning to storm North American shores for the first time in support of the new LP.
Okkultokrati makes it their business to tear apart the rock ‘n’ roll guidebook and mash it in to vicious combat music for fans of punk, d-beat, black metal and generally anyone with a penchant for unsavoury anthems delivered with inimitable attitude. They have earned a ferocious reputation for siphoning elements of disparate genres in to their toxic, distorted brew, a trait that can be observed across the whole of the Black Hole Crew collective encompassing Haust, Dark Times, Blood Suckers, Drugged SS, and others. Once the sheer slamming force of their tunes has sunk in, the iconoclastic quintet has a tendency to pull the rug from under the whole contraption, sending their tracks tumbling in to experimental and industrial forays that further their capacity to ensnare the listener in their bear trap.
http://www.facebook.com/okkultokrati
http://www.okkultokrati.bandcamp.com
http://www.okkultokrati.blogspot.com
http://www.southernlord.com
http://www.southernlord.bandcamp.com
http://www.facebook.com/SLadmin