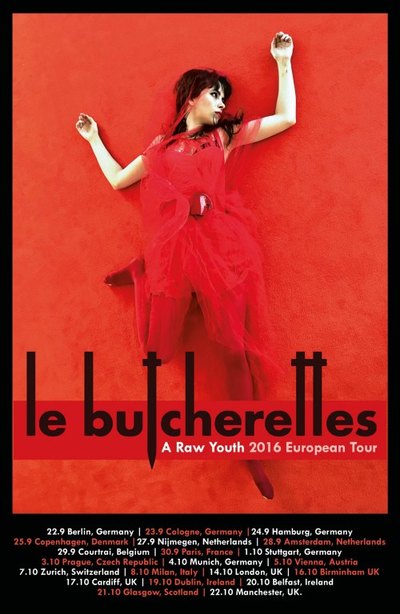 NORTH AMERICAN DATES WITH AT THE DRIVE IN ALSO UPCOMING

The uncontainable trio Le Butcherettes will be returning to Europe for a headlining tour this autumn, in support of their latest offering A Raw Youth which saw release last September via Ipecac Recordings. Bringing the noise across Germany, Denmark, the Netherlands, Belgium, France, Austria, Czech Republic, Italy, Spain, the UK and Ireland, this is an optimal chance for you to witness Le Butcherettes in all their excellence. These shows follow their upcoming sold-out run across North America which will see them supporting At The Drive In, a pairing which already unleashed their rockin’ fury together across Europe earlier this year. Full dates for both tours are listed below.

That’s not all…Le Butcherettes are releasing a Digital Deluxe version of A Raw Youth with four bonus tracks. The bonus tracks include an acoustic version of “Shave The Pride” and “They Fuck You Over”, a b-side featuring King Buzzo (Melvins) titled “We No Owe”, and a live cover of Miley Cyrus’ “Wrecking Ball” which was recorded at Rough Trade in Brooklyn. A Raw Youth Digital Deluxe package will see release on the 13th May.

US TOUR DATES (supporting At The Drive In):