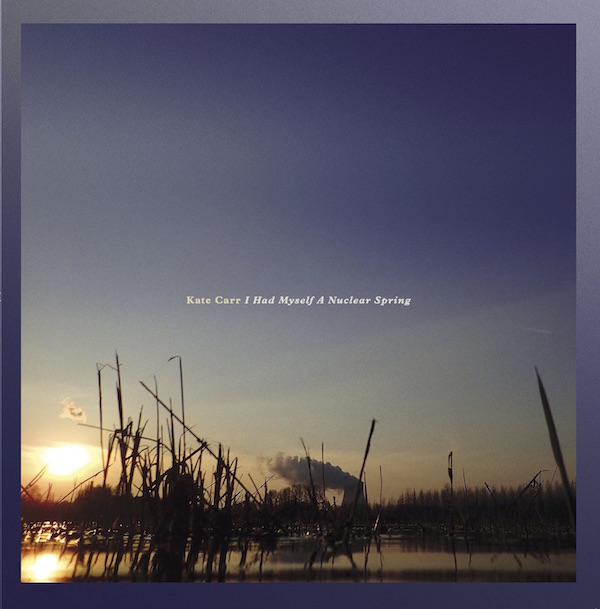 Rivertones are excited to announce the release of field recordist Kate Carr’s new album, I Had Myself A Nuclear Spring, due 26th August 2016. An eerie symphony of cracking power lines, cries of water birds and the high pitched whine of nuclear towers, Carr’s recordings trace the temporary wetlands of Marnay-sur-Seine, situated alongside a large nuclear power plant, just after the flooding of the river.

Kate Carr was first brought to our attention by Cheryl Tipp, curator of Wildlife & Environmental Sounds at the British Library. Cheryl guest-edited An Antidote To Indifference Issue 13: Field Recording Special #2, which featured an article by Kate, entitled ‘Real and Imaginary Journeys in Belfast’.

Carr has been investigating the intersections between sound, place, and emotionality both as an artist and a curator since 2010. Her work has taken her from the Arctic circle to the borderlands of South Africa, with stops in rural Thailand, fishing villages in Iceland, and rainforests in Mexico, along with extensive explorations of western Europe, Ireland and the British Isles.

I Had Myself A Nuclear Spring came to fruition in 2015, when Carr spent a month alone in Marnay, a small town of about 200 people in the champagne district of France, about 120 kilometres east of Paris. Having developed a fascination with the Seine during her childhood after reading a book featuring an artist trying to paint the river, Carr found it pertained to the images struck up from imagination, “swollen and mighty, perilously cold and formidable.”

Carr describes Marnay as “a town of extremes”. Upon arriving at the station, she found herself isolated; “The town’s pub and hotel were shuttered and abandoned. There are no shops, no bars, no cafés, corner stores, or bakeries. There is an unused dusty church, which marks time with its mechanically rung bell every half-an-hour from 7am until 10pm, when all the street lights turn off. Elections took place that month, and the National Front took over the mayoralty from the sitting French Socialist Party candidate.”

The surrounding woodlands provided an astonishing landscape to explore. Full of mud, water, rusting machinery, old boats, logs, and birds, it is a place Carr refers to as “spectacular, eerie and ugly”. In the spring, many of the roads into the town were closed, having been flooded with water up to about chest height and the many dirt tracks through the forest were transformed into fast flowing streams. Determined to document each surrounding sound, Carr procured a rusty bike and spent time slipping, sliding, falling and wading through bogs, ponds, surging streams and flooded fields. “These muddy marshes filled with buzzing electrical towers, corroded machinery, shrieking birds and canals feeding a nuclear complex were like nothing I had ever seen,” she notes.

The neighbouring power station blocked Carr’s interpretation of the natural landscape, both metaphorically and quite literally. “The high capacity electricity cabling itself rendered some types of recording almost impossible – hydrophones no longer captured underwater sounds but, due to high levels of electromagnetism, a rather bracing electrical hum.”

These interruptions lend to the heightened tension throughout the record, and Carr’s great success throughout is to use melody quietly and sparingly to draw the ear towards the uneasy dialogue between simmering electricity and the sounds of the marsh, the nuclear and the wildfowl.

Carr spent a lot of time wandering around at dusk when the birds were most vocal, and at night when the soundscape turned mysterious, with throbbing trains, owls and restless ravens.  Alone in flooded woodlands, Carr says, “I found myself thinking a lot about the emotional efficacy of landscapes of excess, and the ways we use water as a metaphor for a vast array of feelings. Water has inundated our language. There is a watery word which can adequately serve for almost every emotional state we can imagine. The happy tinkle of a mountain stream, the drama of stormy seas, murky depths, and turbulent rivers. Water is unknowable and uncontainable – it floods and overflows, forms whirlpools and eddies. It surges, and runs away. It buffets the shore, it erodes and overwhelms. Water leaves us to drown, float, sink or swim. It cleanses and redeems; it stagnates and threatens.”

“Water also gives us a rich array of metaphors for struggle, risk and release. We tread water, we swim against the tide. We might be swept away, or catch a wave to shore. We jump in the deep end, or simply dip our toe in. I listened to quite a lot of pop music riding the flooded forest paths of Marnay, and I was struck by how many of them contained lyrics pertaining to water. ‘Don’t know where I’m going, don’t know where it’s flowing, but I know I’m finding you,” sang the Go-Betweens, a band from my hometown of Brisbane, Australia, as I splashed my way around. The language of water is the language of movement, of change, of dreams, of love, of emotion, of risk and of despair. It gives us the language for a life well lived I think.”

I Had Myself A Nuclear Spring was previously released in 2015 – download and USB only – on Kate’s label Flaming Pines: http://www.flamingpines.com